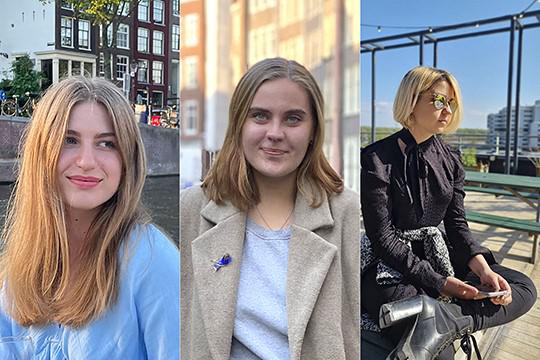 ‘The violence won’t stop me from being happy’

A Dutch boyfriend, an apartment of their own, competed study programs but also still many worries about their home country: how are the Ukrainian students doing that came to VU six months ago?
BY Emma Sprangers 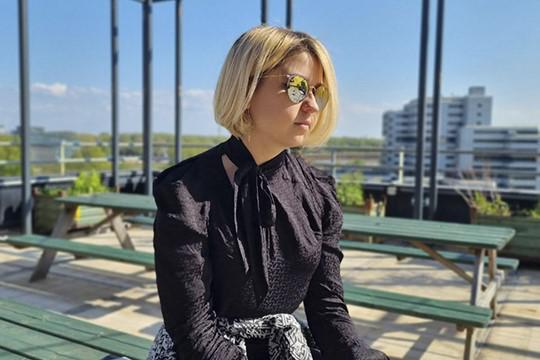 Taisiia Kosenok (21, pictured above) joins the Zoom call in her bathrobe. “How I’m doing? At the moment: terrible." She just got off the phone with her mother who updated her on the recent bombings in Kyiv. "She heard the loudest explosion since the beginning of the war. It was very close to our house. When I hear something like that I feel no fear, no pain. I just think: I should be over there.”

Kosenok wanted to help immediately after the invasion back in March, but there were too many volunteers, not enough weapons and insufficient equipment to store donated blood. Instead of being able to defend her country, she sat on her bed for days reading the news until she and nine other students were picked up in Poland by HR lecturer Kilian Wawoe.

Even now, Kosenok struggles with the feeling of not being able to do anything. “I'm constantly conflicted: do I want to pursue my dream career by finishing my studies here, or do I want to go back and fight for my country?" At the moment, she has chosen to do the master's in Cognitive Science and Artificial Intelligence in Tilburg. After she completes that, she doesn't think there will be a war left to fight in. "Russia doesn't have the resources to continue that long, they’re already asking North Korea and Iran for gear.”

‘I'm constantly conflicted: do I want to finish my studies here, or do I want to go back and fight for my country?’

In September, she was back in Ukraine for a few weeks. A journalist from EenVandaag had seen her speaking on Dam Square and asked her along as an interpreter for a documentary. Back in Ukraine, she heard stories about rape at the Zaporizhzhya power plant, returned to her hometown of Butsha where a woman recounted how her husband was shot dead in the car next to her, and visited a shot-down school in Kharkov. “It was the most intense experience of my life. Being there again really fueled my desire to go back. To fight, not necessarily to see my family.”

All in all, Kosenok is doing well in Amsterdam. “Because of my upbeat attitude, people sometimes think I don’t care, but you just can't be depressed for months on end. The violence is in my head and I disapprove of everything Russia does, but it doesn't stop me from being happy.”

No energy or water 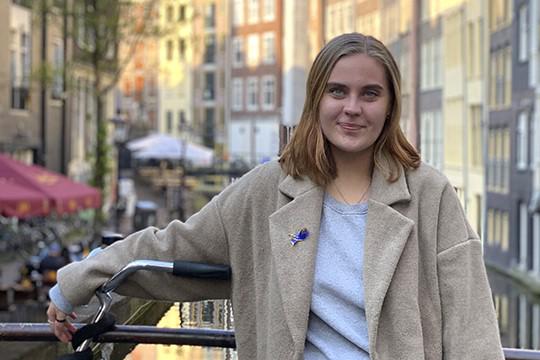 Olha Shevchenko (22) is also slowly finding her feet. “When I spoke to you last time, I was so lonely. I was really lost, kind of like a blank sheet of paper. Now I'm slowly adding more colors.” Shevchenko was among the first group of students to come to Amsterdam with Wawoe. She decided to do so only after she had not slept for days and a friend urged her to flee. Her sister and “patriotic” mother initially stayed behind in Kyiv, but are now looking for ways to get to the Netherlands as well. Options for refugees are limited though, according to Shevchenko.

‘I was really lost, kind of like a blank sheet of paper. Now I'm slowly adding more colors’

“By now my mother also sees that moving to another country does not make someone less patriotic. And it's no longer just a question of whether you survive the war, having electricity and water cut is also a usual thing.” But Shevchenko does not see her mother getting a job here anytime soon without a diploma, and her seven-year-old sister has to go to school. “In Ukraine it would be very normal to leave a child that age at home alone while you work, here they would call Child Protection Services.”

In her first month here, Shevchenko was overcome with stress and hardly left the basement she shared with ten other Ukrainian students. Since then, she wouldn’t say the stress has diminished, but more so she can handle it better now. She has her own apartment near Sloterdijk and started a master's degree in Work and Organizational Psychology. During the summer she was very sick for five weeks, “as if my body thought: now I can relax.” Since she has recovered, she has become more active than she was before. “That period was tough; it really changed something in me. I feel less guilty doing fun things, I also want to be able to enjoy life here.”

When she was with her family in Kyiv last summer, she told her mother she was looking for plane tickets home. “By that I meant Amsterdam - she didn't like that. I am very proud of Ukraine, they fight bravely and are activist. I used to not always like to say where I came from, some people have weird preconceptions about us. But even though I'm proud of my country, even now I don't always like to say I'm from there. I don't want people to pity me or see me as a poor Ukrainian kid.”

‘In February we will start paying full rent’

Shevchenko notices that she and the other Ukrainian students need less and less help. “I don't feel like a refugee, but rather a full-time international student who has the privilege of studying in Amsterdam and hopefully working soon,” says Shevchenko. Wawoe has found sponsors who pay part of the rent of the Ukrainian students, they have received free bicycles and SIM cards and still have a sponsored dinner every week with the other Ukrainian students and Wawoe. “But from February we will pay the full rent. Slowly we become more independent, Wawoe also said: you leave the nest.” 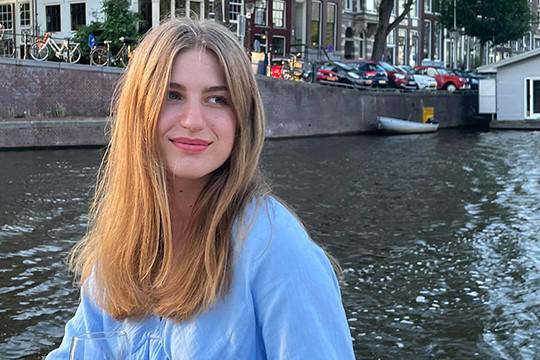 Anna Hurina (21) came to Amsterdam two weeks after Shevchenko and struggled a lot with survivor's guilt. This is now somewhat less present, “but when I talk to friends who are still in Ukraine, I do feel bad when I want to tell them about fun things. I go to festivals while they’re in danger. Therapy did help me learn to deal with this feeling.”

‘I go to festivals here while they’re in danger’

Hurina feels increasingly at home in Amsterdam. “I wouldn't call myself a local, but I'm finding my way better and better.” She says it also helps that she has a Dutch boyfriend. To combat loneliness, she decided to download Tinder to find someone to hang out and chat with. “I didn't have any friends or family here to do that with. I wasn't looking for a serious relationship, but ultimately I had no control over that.”

Now, that boyfriend is introducing her to the world of sprinkles (“How on earth can you have breakfast with chocolate on bread?”) and ‘knakworsten’ [small hot dogs, Ed.]. “We don't have those in Ukraine. I didn't dare buy them at first, but they are delicious.” She calls her boyfriend her biggest support. “He can’t fully understand what I’m going through, sometimes he says it feels like I am talking about a movie when I talk about the war, but I can say anything to him - he is always there for me.”

‘My Dutch boyfriend can't fully understand what I'm going through’

Initially, Hurina wanted to return to Ukraine as soon as possible, that sentiment has changed. After completing her bachelor's degree in psychology here, she felt like not studying for a while and started looking for work. She has since found it, working as a waitress in a restaurant. Her family in Kyiv is without electricity; her mother keeps her informed of the situation from time to time through text messages. “Fortunately, they are physically fine, but it causes me a lot of stress. I'm not going to try to convince them to come here, there's no point. Their whole life is there, they're not going to leave that behind.”

Shortly after our last conversation with the fourth Ukrainian student we interviewed: Nataliia Osadcha, she rushed back to Kyiv where her boyfriend is in the army. On October 20th, she emailed that they have no electricity due to Russian attacks. When they are reconnected, she wants to share what it's like to be there.