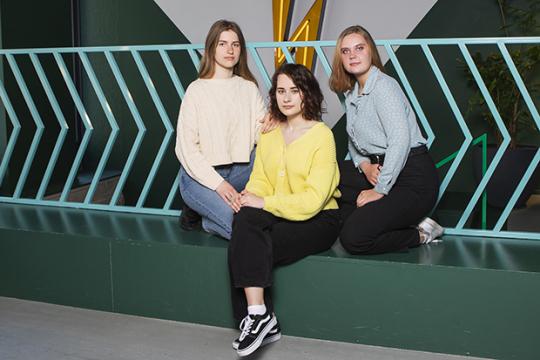 From Kyiv to Amsterdam: ‘My brain is working overtime’

They fled Kyiv in order to finish their study programmes in peace. But is that even possible while the safety of your family and the future of your home country is uncertain? How are the Ukrainian students that HR teacher Kilian Wawoe brought to VU Amsterdam coping?
BY Emma Sprangers PICTURE Martijn Gijsbertsen

Well, not exactly great. Spread over three groups of ten students each, they were picked up in Poland by Wawoe and his companions. Most of them were in the last year of their studies at the Psychology department of the Taras Shevchenko National University in Kyiv when the war started. Wawoe offered them the possibility to finish their studies at VU Amsterdam, which they gladly accepted.

Not everyone was as eager to leave. Nataliia Osadcha (21) for instance, would have preferred to stay and volunteer making masking grids for tents – which she did the first two weeks after Ukraine was invaded. Her father however, feared for her safety and one morning basically forced her to flee together with her step mom and her step mom's daughter.

It’s quite opposite from the experience Olha Shevchenko (21) had. She desperately wanted to flee Ukraine, hoping to convince her mother and little sister to do the same. But her “very patriotic” mother didn’t want to leave her home country behind. Shevchenko feared judgment from her friends who had always been politically active and had stayed to fight for their country. But after not having slept for days on end the friend she was staying with convinced her to take the leap.

The first month Shevchenko was in Amsterdam, she hardly left the basement of the office building where she and the rest of the students were put up. “I’d always been socially active, but it’s like that part of me has been switched off. I’m not capable of enjoying my time in Amsterdam yet. I would like to get into contact with others, but reaching that point is not my priority. In therapy, I’m mostly focusing on how I can relieve some of the stress I’m experiencing. My body is safe, but my brain is working overtime.” Now that Shevchenko is staying in the Student Hotel where all the students have their own room with bathroom, she’s doing a lot better. “I love my personal space and having my own routine.”

Anna Hurina (21) on the other hand, would prefer moving in with a host family. She came to Amsterdam in the second group of students and stays with them spread across two apartments. “It would be a good way to learn Dutch, get to know the culture and experience what day to day life looks like here. At university I have little contact with Dutch students, most of the English spoken courses have international students.”

Making new friends is not high on any of the Ukrainian students’ lists. They find support in each other when needed, but also like to keep to themselves. And maintaining their friendships with people back home has proven to be a task on its own for some. Osadcha for instance, has many Russian friends. She recalls the moment she stopped talking to one of them. “He denied that civilians were being killed and told me I wouldn’t have to worry about Ukraine because we would be a part of Russia soon anyway.” Her best friend – also Russian – called with Osadcha during the hours she spent with her dog hiding from bombs in her bathroom. “I don’t want to lose him, so we avoid certain political topics.”

Back to Ukraine asap

Although Hurina is looking for ways to settle into Amsterdam life, she wants to go back to Ukraine as soon as possible. “But even if the war were to end soon, rebuilding the country will take a long time. Here, I can work on a better future and hopefully get a job to support my family back home.” Osadcha shares the same sentiment. She is pleasantly surprised by how nice everyone in Holland has been to them (Wawoe had warned them the Dutch can be quite distant), “but I dream of my country. My heart lies back in Ukraine.” “It’s ironic”, Shevchenko say, “During my study program I was specializing in the field of social work with refugees and immigrants. Now I’m one myself. But I think now that I’ve gone through this experience, it will only make me better suitable to help others. Our work will be much needed after the war.”