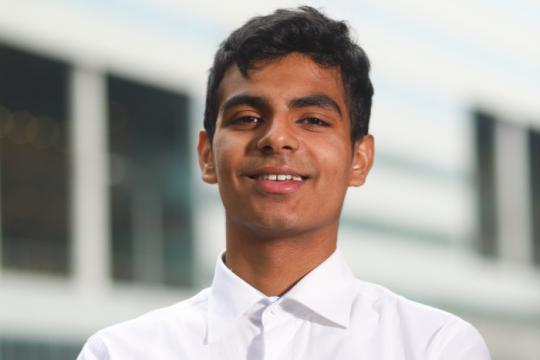 “Ordinary man” Abdul Malik came, saw and conquered with his independent list at the recent Student Council election. The turnout was historically low.

Independent candidate Abdul Malik has won the election to the University Student Council (USC) with flying colours. Not only did he manage to secure a seat on the representative body, he also garnered the highest tally of votes: 439 out of a total of 2360 cast. Only Sumeyye Dalkiran of student union SRVU came anywhere close to that figure, with 430 votes. But the SRVU did gain the most seats: eight in all. The University Party won two.

Faculty elections
Turnout in the faculty student council elections was nothing to write home about, either. In three faculties, there was not even a vote. Humanities had exactly as many candidates as seats available, whilst no-one stood at all at either Religion and Theology or Amsterdam University College. As a result, their students are now not represented in the university’s consultative structure.
As always, the Faculty of Medicine had the highest turnout: 23.20 per cent. At 5.31 per cent, the figure was lowest in Behavioural and Movement Sciences.

The turnout was historically low: 8.26 per cent. VU Amsterdam students have long been reluctant to head for the polls, but in previous years the turnout was generally around 12 or 13 per cent.

Malik was a surprise act this year. He registered as a candidate well after the deadline, under the party name I Have a Dream – Malik Luther King. His sister Aisha, who represented the SRVU on the outgoing USC, stood this time for the Faculty Student Council at the School of Business and Economics. She received the most votes there: 139 out of a total of 578 cast.

Malik, a twenty-year-old Econometrics student, had initially hoped to stand under the SRVU banner but was rejected by the union. Exactly why is currently being fought out between the two sides in the comments section under an interview with Malik on this website. In that interview, he explains that he then decided to launch his own party to “bring a fresh perspective” to the USC. He considers the council elitist and inaccessible, focusing mainly upon students who are already actively involved in the ins and outs of university politics. He instead wants to reach VU Amsterdam’s “inactive” students.

According to Malik, students do not engage enough with the university. “Most come here to get their credits and then they go home again. There is no involvement at all, and that’s what I want to change.” Through events such as interfaculty sports tournaments, he believes that VU Amsterdam can achieve greater social cohesion.

Malik felt thwarted by the established order on the current USC and managed to enlist TV presenter Beau van Erven Dorens – a personal acquaintance – and singer Xander de Buisonjé to back his campaign. In a video posted on Instagram, they called on students to vote for him.

Traditionally, successful candidates put party allegiances on the back burner once elected to the USC and unite in their efforts to achieve the common goal of representing the interests of VU Amsterdam students. But after some mutual recriminations during election week, it is not yet clear whether this will be the case with Malik Luther King and the other groups represented on the new council. Although Malik has already let it be known that he wants to start with a clean slate.