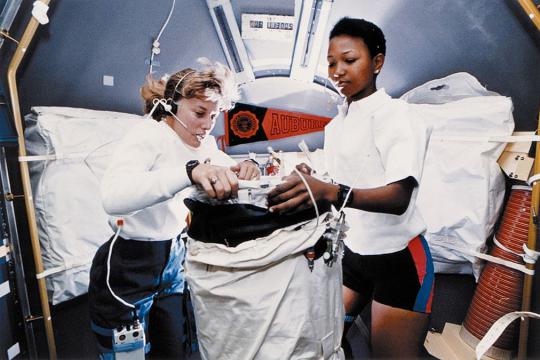 “More diversity?” In academic circles this phrase often still means “more women”, says Saskia Bonjour, political scientist and member of The Young Academy. Too little is being done for other target groups.

Should universities be allowed to just casually register the ethnicity of their students and staff? Should more diversity officers be hired? Recently, such issues were the topic of heated exchanges during a debate in the Dutch House of Representatives about the National Action Plan for diversity and inclusion.

There were roughly two perspectives. One said: you shouldn't pay attention to diversity and background because it's only about quality. The other said: sometimes quality isn't revealed because certain people are disadvantaged.

In fact, everyone wants to achieve the same thing, says political scientist Saskia Bonjour, but they have different opinions about how to get there. “All the current research suggests that people are often not evaluated on the basis of their qualities. That means that something is still going wrong.”

Bonjour is Associate Professor at the University of Amsterdam and member of The Young Academy, a group of relatively young researchers affiliated with the Royal Netherlands Academy of Arts and Sciences. In a joint project with Professor Marieke van den Brink and student Gwendolyn Taartmans, she analysed what the universities’ diversity policies as of the year 2020 reveal. The conclusion: there is still a world to be won.

It is rather remarkable that these diversity policies themselves show little diversity. “The focus is still heavily on women”, Bonjour explains. “Over the years all kinds of measures have been devised for gender equality, such as targets, fellowships and mentorship programmes.”

In contrast, policies oriented towards other target groups are quite thin, especially when you look for measures against racism. Right now that word hardly occurs in most plans for academic diversity. And there are practically no actual figures about students and staff members of colour, Bonjour and her colleagues have revealed.

But isn't it understandable that compiling such lists raises sensitive issues? Indeed it does, Bonjour acknowledges. “And that discussion is also very complex: how many people of colour do you want to include, and how to you define such diversity?

Quantitative data collection is, nonetheless, a necessary step, according to Bonjour. “Otherwise we'll never get there. Now you have one side that says, ‘You can't do that because it's racist.’ The other side is aware that there are exclusionary practices, but there is not yet enough data to show exactly how and where this is taking place.”

In order to attract more women into the universities, promotion and drop-out data really made a difference, Bonjour found. “And there are also different ways of collecting data on ethnicity with care and consideration; Statistics Netherlands does this too, for example.”

The researchers underscore the fact that diversity is more than target data, something that's called “fixing the numbers” in the published literature. If universities really want to become inclusive, changes to academic culture will have to be made first: “fixing the institutions”.

This might include better recruitment and promotion procedures, but also gender neutral toilets and quiet areas. “In essence it's about making space for people who do not perfectly fit existing norms”, Bonjour says. “Because why bring people into the university if they are not going to feel at home there?”

There is a third and last step: “fixing the knowledge”. By this, researchers refer to the integration of diversity into teaching and research. Will students be actively encouraged to see things through a different lens from time to time? What kind of knowledge about social issues, such as gender, ethnicity and class, will be discussed in the classroom? And how do we ensure that this knowledge is not left out of research?

Bonjour fears that this last step is perhaps the most difficult and the most important. “The choice of which researchers are cited and which texts are studied is often self-evident, simply because ‘we have always done it that way’. Moreover, administrators don't like to tell faculty members what they can teach. And yet, together we have to take a fresh look at these issues. And to get started we can all use a little push in the right direction.”

Put briefly, there is a lot of work to be done. But the question is: who is going to do that work? Of the 18 diversity officers interviewed by the researchers, most say that they don't have enough time or money to work on the problem.

“For example, they only get two to three days per week to deal with the policy of their whole university”, Bonjour explains. “Or they are researchers who have to take care of diversity ‘on the side’.”

Another problem is that diversity officers are held responsible for policy, but often have scarcely any influence on it themselves. As Bonjour suggests, “If you really want to change something at a university, you have to give the responsibility to those who decide on appointments, promotions and the content of academic programmes.”

A diversity officer can offer advice on those things, she says, but it's the administrators and those in senior roles who ultimately decide. “But I also think that, when it comes to diversity, a large number of these people simply don't know what to do.”