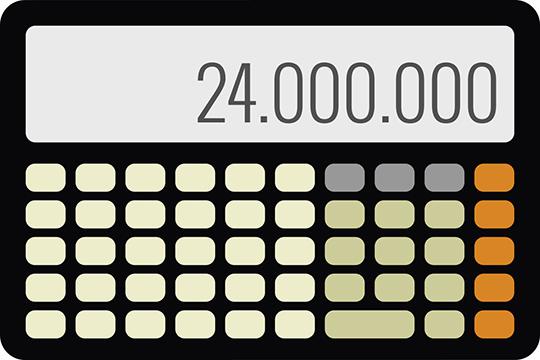 VU Amsterdam closed the year 2020 with a positive balance of 24 million euros, 16 million higher than budgeted. But still the university did not make a profit, says board member Marcel Nollen.

To start with the anticlimax: the positive result of 24 million euros includes more than 15 million euros in accounting profit. This profit exists only on paper, and according to VU Amsterdam’s financial director Hanco Gerritse, the University does not have a euro more to spend. But more on this later. The remaining surplus of 9 million euros comes close to the positive result that VU Amsterdam had expected in the 2020 budget: there's a difference of 800 thousand. That is only a tiny bonus when you consider that total income and expenditure both exceed half a billion.

But it is purely coincidental that the result minus the ‘non-cash effects’ almost amounts to the budgeted 8 million euros in profit, because the year 2020 obviously turned out completely different than expected. There were more students, research projects were delayed or cancelled and the campus was almost devoid of people. In other words, there are plenty of interesting things to read in the 2020 annual report!

Costs of the pandemic

Take the calculation of the effects of the coronavirus pandemic: Covid-19 cost VU Amsterdam an estimated 12 million euros. The university missed out on some 13 million euros in income, 7 million euros of which from indirect and contract funding. And there was 6 million euros less turnover from events, catering, parking revenues, repro, patient care at the Academic Centre for Dentistry Amsterdam, Griffioen Cultural Centre, etc.

Hoewever, expenses fell by a total of 1 million euro thanks to coronavirus; the sum of a variety of costs and benefits. For example, staffing costs increased by 5 million euros due to contract extensions, accrued leave entitlements and more external staff. But institutional expenses fell by 6 million euros, despite the cost of facilitating things like remote working from home. This was due, among other things, to less travel expenses claimed, lower printing costs and lower costs for conference visits.

Some of the budget was also left unspent due to the coronavirus crisis, in particular the extra funds that VU Amsterdam had received from the government to strengthen the sciences. “That 24 million is not profit,” VU Amsterdam board member Marcel Nollen explained to the Joint Assembly in the meeting to discuss the annual report. “Many payments have been deferred and will have to be settled later.” However, he admitted, even then VU Amsterdam had a higher surplus than it expected. “That is why we have planned a negative budget for 2021,” he continued. We have been less spendthrift, because we want to avoid such surpluses.”

> More reports of worrying behavior in 2020

Correction June 28, 2021: VU Amsterdam bought the interest rate swaps between 2002 and 2008. An earlier version of this article incorrectly said 2018.