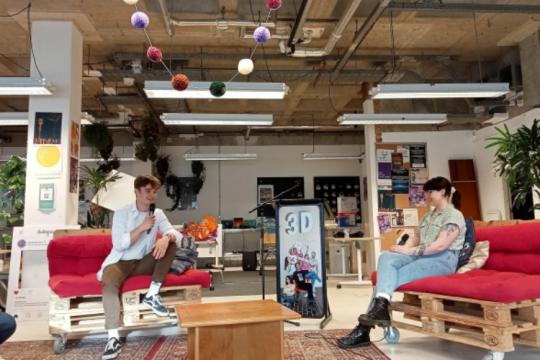 Should the VU go vegan, oblige its international students to learn Dutch and provide for free tampons? These and other topics were discussed yesterday on an election debate night at the debate center 3D.

It’s election week at the campus, where students run for a seat at one of the faculty student councils or the central council. As part of the election campaign, the future of VU was at stake yesterday in the 3D room, where three candidates from VU Amsterdam's only remaining student party SRVU debated five independent candidates over the steps to be taken for a diversity-friendly and greener campus. Concerns such as the integration of international students, the housing crisis and whether the campus should go completely vegan, were brought to the table.

“International Students should learn Dutch and VU should facilitate this.” Candidate Giovanni Stickdorn, from Giovanni's Student Party (not formally a party but an electoral list), advocates a campus where international students have the opportunity to learn Dutch. “For me, it made a world of difference to learn the language. It not only brought me closer to the Dutch culture, but the Dutchies also benefited from my international background.”

Giovanni thinks the way to accomplish this is by integrating a mandatory Dutch course into the curricula of the international study programs. Contrarily, SRVU’s Rebekah Lamb, although agreeing with the idea of facilitating Dutch courses for foreign students, does not think they should be mandatory. “Assimilation is not the solution for immigration", she stated. Instead, she presented the idea of facilitating international students with a committee where they’re introduced to the Dutch system. “Some sort of student well-being point, but extended", Rebekah suggested.

Other issues concerning international students were discussed in the debate. “VU Amsterdam should provide housing for international students.” SRVU chairman Joep van Dijk and Arman Valanejad, from the list The Voice, took on this round. Both candidates were in agreement, and their demands were clear.

Van Dijk: “The VU should financially compensate students who are in emergency housing and lobby for more housing in the city.” Arman added, “The international office must better inform international students of their options after they have been provided with one-year accommodation.”

Finding more accommodation is not the only solution. “VU should be more mindful of the number of international students they actively recruit. It is not a question anymore that universities are aggressively inviting foreign students”, stated the chairman.

Free pads and tampons for the “fem representative community” was also discussed among the candidates. “Being a diversity-friendly campus also implies providing and caring for the students and the VU community”, stated Rebekah Lamb. Her counterpart Valerie Felipe, from the list Light Storm, agreed. “Free menstrual products on the campus should not be a question anymore. If we can find soap and toilet paper in the bathroom, we should also have free menstrual products at hand in every bathroom.”

Their message for the white men who make decisions on the campus: “It’s not that difficult, just do the math and add tampons and pads in the bill to the expenses for toilet products.”

Kieran Smith of list VIBE (Vegan International Bètawetenschappen Enterprise) and SRVU’s Vincent Mesrine did not agree so easily on whether the canteen should go completely vegan. Mesrine’s approach is to “enter a transition period and take small and efficient steps to cut carbon emissions.”

Smith thinks the campus must come up with a long-term plan to integrate a plant-based diet. “Think, for example, of adding vegan-friendly labels in the canteen or the Spar.” Mesrine carefully states “We should think this through, a vegan diet is sustainable, but also more expensive. We can’t afford to have a more expensive canteen.”