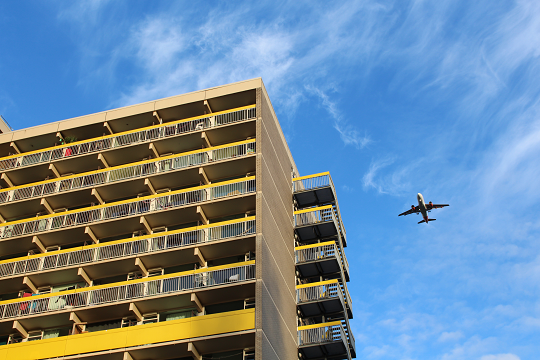 Quarantine at Uilenstede: ‘It felt like each day would never end’

When Lior Tabibi (24) from Israel came to the Netherlands to study philosophy and artificial intelligence almost two years ago, he had to spend ten days in quarantine. “You go into the room and nobody really cares for you. Your only contact with the outside world is online.” There wasn’t anyone who helped him get through those ten days.

In order to help other international students who experience the same once they enter Uilenstede from abroad, Tabibi set up the Whatsapp group ‘Quarantined in Uilenstede’ with the help of Maëleen Riochet. Here students can help each other with practical issues, such as getting groceries for each other. Tabibi thinks it’s especially important for students to have a sense of community. “I think social and mental help is the most important. It’s difficult to come into a new country and quarantine five or ten days. Some kind of social support – the feeling that we are together – is helpful.”

Many students who recently arrived from a country that is deemed risky, had to spend five or ten days quarantining. Harsh Patil, an international business administration student from India, arrived at Uilenstede this summer and attests how frustrating it is to quarantine. “You’re in your room by yourself. That’s going to be it for five days. You should keep yourself engaged with something, or you will go crazy. You’ll get irritated at absolutely nothing.” The situation is perhaps exacerbated by the stark contrast between quarantining and non-quarantining students. “You live in Uilenstede, surrounded by four thousand students. If you stand on the balcony you can see everyone having fun. It feels really unfair to have to sit in your room at the same time”, adds Patil.

‘If you stand on the balcony you can see everyone having fun. It feels really unfair to have to sit in your room at the same time’

Roughly a month ago, psychology master student Muskaan Gandhi (22) self-isolated at Uilenstede  upon her arrival as well. “Being locked up in my room, it felt like each day would never end. It was somewhat lonely and because it coincided with the orientation week, I did feel like I missed out on many activities”, she says.

The long journey to get tested

Students who test negative for Covid after five days are allowed to come out of their quarantine. But Gandhi explained that it actually took six and a half days for her, because the day of arrival does not count and she had to wait for the test results.

Getting tested wasn’t easy either. When she called for a test, Gandhi was told to go to Louwesweg, six and a half kilometers from Uilenstede. She tried to get an appointment at Amsterdam RAI instead, but couldn’t. Quarantining people are told not to take public transportation, meaning they should use a private vehicle or walk. As a new international student without a bike, she therefore walked a total of 4 hours. “My walk back home took over two hours because I was exhausted and took multiple breaks”, says Gandhi.

Patil avoided a similar situation. When he made his appointment he was told to go to Schiphol, twelve kilometers from his location. “Thankfully a friend recommended a centre three kilometers away”. Still, he was perplexed that he had to go to a testing centre in the first place. “If you say that people pose a risk of bringing a virus into the country, why are you asking them to leave their rooms to get a test? How is that safe? If it’s really a quarantine, someone should come to your house to take a sample. That is the norm in so many countries.”

Noncompliance with the quarantine

According to Tabibi, people who quarantine entering Israel are checked upon. “There is enforcement to make sure you do so. The police will come to your doorstop to make sure you’re there. That doesn’t happen in the Netherlands.”

This begs the question whether students in the Netherlands actually comply with the five or ten day quarantine. “Before flying into the Netherlands, I knew from some mutual friends that no one follows the quarantine. No one cares about it. No one checks it. I can comfortably say that around ninety percent of people just violate the quarantine on their first day”, says business administration student Patil. Harsh Patil (not his real name, because he doesn’t want to risk a fine) admits that he himself has also left the apartment to go to the supermarket. “I did get groceries a few times, because you can’t order food all the time. It’s way too expensive.”

Psychology student Gandhi faced the same dilemma. “I was told that they’re not very strict with quarantines in the Netherlands. That I could get my own groceries and walk around if I wanted to. But I personally felt that it’s my responsibility to quarantine.” She adds that she was also afraid of a potential fine: “I don’t want to pay over three hundred euros for leaving my house!”

Patil finds it strange that he had to quarantine: “When I flew out of India, India was having perhaps the lowest recorded number of cases in two months. Especially in Mumbai where I come from. For a population of twelve million, there were around 600 cases recorded per day. I’m also fully vaccinated, with a vaccine recognized by the Netherlands. Despite that, I still had to quarantine. I find that really strange”.

The day after Ad Valvas spoke with Patil, the Dutch government announced new rules. ‘Vaccinated travelers from the United States, the United Kingdom and other very high-risk areas no longer have to self-quarantine on arrival in the Netherlands’, the government website reads. This may significantly reduce the amount of incoming students who have to quarantine as of 22 September.

However, that does not mean that initiatives such as the Whatsapp group by Tabibi will become irrelevant. Vaccinated students who become infected as well as unvaccinated students who enter the country will still be expected to quarantine. Not to mention that the rules can be reverted at any time. Tabibi hopes that students comply: “We are in this thing together. It’s been almost two years now and it doesn’t go away. So I believe it’s our responsibility as students and as internationals. Sometimes it feels like we’re immune because we’re young, but it’s not only about ourselves, but others as well.”