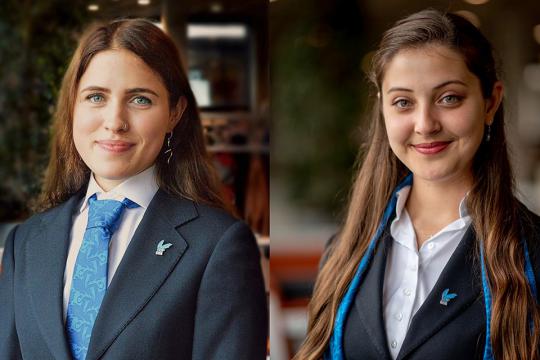 ‘We want to remove the formality of a desk’

Student wellbeing: for students by students
comments 1
The VU has greenlighted a two-fold plan by the University Student Council for a new panel and meeting point where students can talk to students about their wellbeing. ‘We really need to start as soon as possible’, the initiators of the plan say.
BY Peter Breedveld

The student wellbeing point plan comprises a digital component and a physical location staffed by students, where students can turn to with issues related to their wellbeing. The student wellbeing panel is an advisory board consisting of student representatives of the different faculties. The University Student Council hopes to start this academic year already.

“There are already multiple desks for students, for instance, the student desk and the international desk”, says Kimberly van den Ouden of the USR, who wrote the plan together with her USR colleague Selin Çakmak. “But those are primarily staffed by VU employees, and we feel there’s some distance between them and the students. We want to remove the formality of the desk and make it into more of a living-room setting, where a student can just come in and talk to another student.”

'The student psychologist usually has a long waiting list'

“And while the student desk handles multiple issues, mostly technical in nature, we limit ourselves to student’s wellbeing, with the aim to also alleviate the services receiving this influx in wellbeing-related questions”, says Çakmak. Van den Ouden: “For instance, the student psychologist usually has a long waiting list, especially during the exam periods, and often, when it’s a student’s turn, they find out they could have gone to, for example, their academic advisor with their problem, who often has a shorter waiting list. We’d like to make the service more efficient by providing students with accurate information about where to turn to. So they know exactly what they need to do and where they can go.”

“The students who work at the point are not expected to be therapists or to give low intensity treatment to other students”, Çakmak explains. “They are just there to provide a listening ear and give appropriate directions and information about the information they have been trained for.”

“The idea is to set up a digital contact point, embedded into the student wellbeing webpage which the VU has set up recently”, Çakmak explains, “with a chat function where students can anonymously share things, and if they want to talk with a real person we are planning to have a walk-in hour on Zoom.” Apart from that, the USR wants to realize a physical meeting point at the VU campus. “One of our ideas was a kind of pop-up greenhouse next to the student desk in the main building”, says Van den Ouden. “Vinod [Subramaniam, the Rector Magnificus, red.] even suggested placing this pop-up location at the library on 2B. We are looking into the possibilities, but most importantly we want to be really visible whilst creating a little bit of privacy, or at least a sense of privacy.”

The second part of the plan is for a panel, not only as an advisory board but also as a link between the faculties and the student wellbeing point. “We’re going to install student wellbeing representatives at every faculty”, Cakmak says, “so students know who their contact person is, and if students want to be more actively involved they can join the panel, or a student organization and when they have ideas for initiatives we can try and help them set it up.”

Foreigner to the system

The realization of the plan was accelerated by the Corona crisis, which hit students hard, as was indicated by the recent Corona Monitor: Student Wellbeing, a survey held by the VU to inventorize the students’ wellbeing. But the need for something like a student wellbeing point has been clear since long before corona broke loose, especially for international students at the VU. “For me as an international student, when I had just arrived at the VU the Dutch culture and system were very new to me, Çakmak explains. “I had no idea how things worked, what I was supposed to do to get information. I went through a tough time since coming here and from my personal experience, as well as the start of the Corona crisis, I found it crucial to have a support system provided by fellow students and a location that has the collective information that all students need.”

'I had no idea how things worked, what I was supposed to do to get information'

“I was the chair of the Humanities Faculty Student Council when Corona hit”, says Van den Ouden, “and we immediately saw the effect it had on students, and on international students in particular. They didn’t have the support system that most Dutch students have. I was involved with a lot of student wellbeing groups and I quickly realized that, because everything is decentralized at the VU, people work really hard and often on the same thing separately from each other, with nothing really coming off the ground. We were thinking about setting up a central platform, but the more we thought about it, the more we felt we were just adding something new on top of what we already had. Because the real problem is not that we don’t have enough initiatives and facilities. There are so many wonderful employees and teachers working really hard on this topic of student wellbeing. The problem is that most students simply don’t know about them or how to reach them. Therefore, we wanted to have a more structural solution that would also create continuity, something to connect all the things that are being done. This will also help with visibility and communication, so that we can finally reap the benefits of the hard work that has continually been done.”

The USR wants to start recruiting students as soon as possible. “We are looking for students who are eager to help and can relate to the problems a student might have, for instance, because they have dealt with similar problems themselves”, Çakmak explains. “This is really the most important qualification we are looking for. If they have that motivation, we will provide them with the necessary skills, like trainings on how to deal with confidentiality, and interview trainings, so the students can do intakes and gather data from them to determine which info to give to a student.”

'We are looking for students who are eager to help'

“We really need to initiate this as soon as possible”, Van den Ouden says. “We hope to start soon with the recruitment of students for the panel, to make an inventory of all student wellbeing facilities at the VU, and we would also like to start this academic year with the digital component of the student wellbeing point, or at least a pilot, and, ideally, we would also have a physical place ready before the start of the new academic year.”

Door Chantal van de… op 09 April 2021
This is such a great initiative! Good to see a structural improvement like this 'accelerated by' the corona situation.