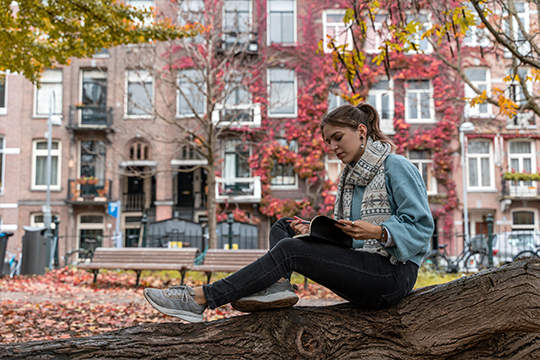 International students who try to get Dutch student finance are required to work nearly two days per week, but some students have great difficulty meeting that requirement. With help from legal experts they are able to fight back against the decisions of DUO.

Several students have already won in cases against the Dutch Minister of Education after student finance agency DUO denied their finance application. This inspired VU student Ksenija Ustinoviča (22) from Latvia to do the same when DUO did not extend her loan. A loan she needs because her income barely covers her rent.

Ustinoviča explains that while 56-hours per month may not sound like much, it is a lot for a full-time student. She already had a job at the VU Art Science gallery for at least 6 hours per week, which wasn’t enough. That is why she started delivering parcels of designer clothes for a warehouse. It took her an hour to cycle to this job, because free public transportation also relies on getting student finance from DUO.

While running from parcel to parcel, Ustinoviča couldn’t keep up with her groupmates texting “24/7” about a paper they were working on. Nor could she, as an art student, afford to go to any exhibitions: “My social life was basically cancelled.” She says her studies suffered from her busy work schedule and this summer, she faced a BSA committee and risked being kicked out of her programme.

‘My social life was basically cancelled’

Ustinoviča immediately stopped working at the warehouse when she got her loan. However, after six months DUO looked into her activities and concluded that her work was insufficient. The loan and travel product were put to a stop and she is once again feeling overwhelmed. “I feel like I’m screaming and knocking on doors, but no one hears me. That’s the story of being international here.”

To challenge DUO’s decision, Ustinoviča turned to Avant Advocaten, a law firm that assisted dozens of students with similar cases. Cost-free, because the legal representation is subsidized by the government. “Students who are economically active in the Netherlands have the right to equal treatment by public authorities. That’s why we are successful in roughly ninety-five percent of these cases”, says Gor Gabrelian of Avant Advocaten. “We believe that the Ministry of Education and DUO are misinforming student by providing wrong or at least inaccurate information through different channels.”

Did DUO become more lenient?
In May it was reported that DUO would be more lenient towards students who work less than 56 hours. VU student Ksenija Ustinoviča says she did see a banner on DUO’s website saying that if she doesn’t meet the requirement, she can call. “So I called them and they told me I should work 56 hours.” Lawyer Gor Gabrelian noticed a change in how DUO responds to students who appeal their student finance denial, but many students don’t realize they can successfully challenge DUO. And because they have to appeal within six weeks, it might be too late by the time they have a better understanding of the system.

Gabrelian explains that Europeans working in the Netherlands can enjoy the same rights as Dutch citizens, making them eligible for student finance. “Ideally DUO would assess each person’s rights on an individual basis, but because that is very taxing they implemented certain minimum requirements. If you meet those requirements you are automatically considered a worker with a right to student finance, but when you don’t no individual assessment is made. This makes the minimum norm a decisive norm. However, DUO’s norm goes against the definition provided under EU law. The Court of Justice of the European Union has ruled several times that the hours worked cannot be decisive by themselves.”

Gabrelian thinks DUO doesn’t individually look at cases due to political choices. For instance because students from Eastern and Southern European countries will generally have lower income parents and can therefore get higher supplementary grants when they apply for student finance. He also believes that DUO is not sufficiently staffed to handle individual assessments.

The work requirement used to be lower and only became a significant problem when it was raised from 32 to 56 hours in 2014. Because the amount of hours isn’t specified in European law, students are able to challenge DUO and win in court. “With the Dutch childcare benefits scandal everyone was shocked. It has a profound impact on Dutch nationals. But this matter solely revolves around non-Dutch nationals. The EU-students do not have voting rights so there is no political interest. The minister of Education is not held accountable for the systematic discrimination of EU-students. It remains up to the judicial system to uphold the rights of EU-students, says Gabrelian.

Waiting for the verdict

Ustinoviča expects to find out whether her case was successful this month. If she wins she can get the loan as well as a reimbursement for the months she missed out on free public transportation. She is cautiously optimistic about her case. “I think the lawyers mentioned that if you work 26 hours per month, that could be enough. The more you work, the higher your chances of winning. But working 56 hours for me means not studying at all, so I really hope I win.”