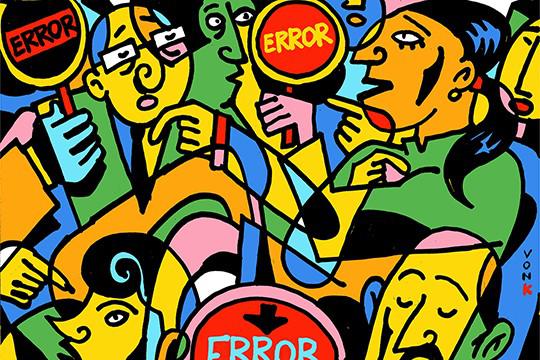 Stop being self-satisfied, talk about your mistakes

Socially safe workplaces
The climate in many academic workplaces is often miserable. These three researchers are working on how to improve it. ‘Share negative experiences with each other, that really helps.’
BY Welmoed Visser PICTURE Berend Vonk

Harassment and abuse of power, bad supervision and gossip. These are issues that continually arise if you ask academics about the work climate at their universities. Forty percent of university staff have experienced a lack of workplace safety.

But things could be different. By using the online document ‘lab philosophy’, for example, that is revised each year by the research group; or by holding an annual session where researchers can speak openly about what went wrong in the past year; or with a course that presents hypothetical examples showing the dilemmas researchers wrestle with.

Psychologist Hans IJzerman’s past experiences of research environments were the reason he wanted to draw up a written lab philosophy. This online document explicitly addresses what the lab group regards as good, honest research and what the group’s priorities are: research that contributes to a more inclusive world, while granting everyone access to the data. The lab philosophy also says what you should do if you discover mistakes made by colleagues or if you do not agree with their method of working: report it and confront each other in a constructive way. But you will also find more practical things, like templates for Master’s theses, guidelines for sharing data, how to invite others to become involved in your research, and what should be discussed at daily meetings.

“Work climate and academic integrity are closely linked; that’s evident every time someone does a study. And because of the hierarchical relationships in the academic world, you can’t assume that these issues will take care of themselves”, IJzerman suggests. He is currently Principal Investigator at the Co-Re Lab at Université Grenoble Alpes, which is studying body temperature regulation among romantic partners, among other topics. He formerly worked at VU Amsterdam, and at the Universities of Tilburg and Utrecht.

IJzerman: “Standards can change very quickly, for example in the area of open science. That makes it a good idea to have a crystal-clear statement of how we as a group view these developments.’’

The lab philosophy document begins like this: ‘Research is incredibly hard. There are a near infinite number of paths one can take within the same project.’ In order to ensure that when it comes to crucial points the other researchers take the same turnoff as IJzerman, each new member of the group receives the 15-page document to read through and discuss with the rest of the group. One of the objectives is ‘to make science as fair, efficient and informative as possible.'

The entire text breathes an atmosphere of inclusivity: it makes explicit that the lab is a place that welcomes all good researchers, regardless of their race, religion, sex, sexual orientation or external appearance. This is important, the group says in a joint response, because history has shown time and again that nothing changes in the area of equality unless you take a very clear position. “We see the consequences of this every day in our work”, the researchers explain, “scientists are a homogeneous group, research populations are homogeneous and there is a homogeneous approach to research questions.” IJzerman hopes that explicitly welcoming people from non-dominant groups will offer a safe haven for the members of these groups who often feel they are not heard or represented in scientific research.

There are incidentally differences between the French academic system and the academic system in the Netherlands: scientists in France are more likely to be hired for a permanent job more quickly and that is one reason they experience somewhat less pressure to perform. “But that does not apply to PhD students and postdocs who have to compete in an international arena and thus experience the same kind of pressure as in the Netherlands”, IJzerman says.

The lab philosophy of IJzerman’s group won a Commendation from the Society for Improvement of Psychological Science.

“When I read all those reports about the chilly climate in academe, I tend to think that it isn’t a problem we have here”, says Wiesje van der Flier, scientific director of the Alzheimer Centre Amsterdam which employs over a hundred researchers. “But that’s exactly where things go wrong. I’m someone at the top, how can I really know whether people in my team feel safe?”

That was the reason Van der Flier began holding show-your-true-colours sessions. Once a year group members discuss the things that went wrong during the past year. Senior researchers take the lead in these discussions: “If we share our mistakes or dilemmas with the group, then younger researchers will hopefully also do so.”

Van der Flier hopes to create a research environment where people are allowed to make mistakes. “It’s about shades of grey”, she says, “about errors or mistakes that crept into the research accidentally. How should you deal with these?”

She refers to a real-life example: a few year ago she submitted an abstract for a conference and someone in the group re-calculated her data and didn’t come up with what she had come up with.

“We have a moral problem”, the researcher said very cautiously.

“We don’t have a moral problem”, I said, “I made a mistake and we’re going to correct it. I was happy that she had pointed it out to me, it allowed me to modify my analysis.

‘We don’t have a moral problem, I made a mistake’

Another example is a PhD student who realized in a follow-up article that she had made an error in a previous article. What should you do then?

“We called the editor of the publication”, Van der Flier says, “who promptly began to commend us for the fact that we had called him. It seemed obvious to us. He then asked whether the error had any consequences for the conclusions. That was not the case. Therefore he proposed in this case not to publish an erratum.”

These are examples that will be recognized by researchers in many different fields. What’s special about Van der Flier’s approach is that she doesn’t want her researchers to wrestle with these kinds of dilemmas on their own: “I believe that a research group’s work environment benefits from openness. Everyone makes mistakes. It’s better if we share them with each other.”

Complaining or asking for help is also allowed in Van der Flier’s group. “Everyone is working incredibly hard. It makes sense that this occasionally becomes too much; I hope that my team feels free enough to approach me or someone else with such problems.”

Van der Flier has consciously chosen not to set down a new written code of conduct: “Everything has already been put down on paper — codes of conduct, ethical codes, research codes. And yet there are lots of things that are not right in scientific research. I think that the culture of the group is much more important and you don’t get mutual trust by drawing up a written document." 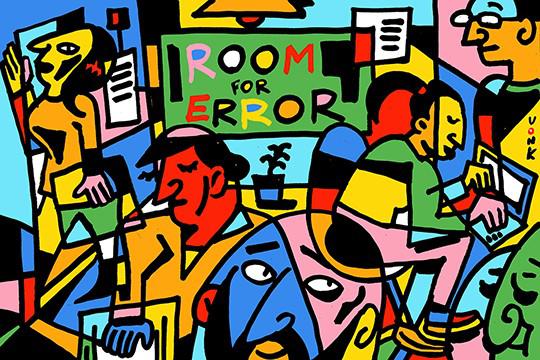 “There’s a lot of jealousy and hatred among researchers”, according to psychiatrist Joeri Tijdink, who’s cross-appointed to the Department of Philosophy at VU Amsterdam and the Department of Ethics, Law and Humaniora at Amsterdam UMC. He studies the academic climate and is the author of Wetenschappers op de sofa, hoe te overleven op de universiteit (Researchers on the couch; How to survive at university).

With his former PhD student Tamarinde Haven, Tijdink made use of what are called moral case deliberations, a method which helps researchers discuss together moral dilemmas in the area of academic integrity. For example, your lab partner is playing fast and loose with the rules of academic integrity. What should you do? “By talking it over together you create a space for reflection”, Tijdink explains, “which in turn allows researchers to make better choices when they are overtaken by this kind a situation.”

Tijdink hopes that this kind of conversation will become more normal, including within research groups. But this would require a considerable change of culture. “Often there is simply no time or space for it”, he suggests.

‘There’s a lack of soft skills in scientific research, and that’s putting it lightly’

Superb Supervision is a course Tijdink and Haven have developed together. “PhD students frequently receive inadequate supervision, partially because supervisors don’t really know what they should be doing. So you get your doctorate and then all of a sudden you have to supervise PhD students yourself. No one tells you how”, Tijdink says. Currently the course is being offered at VU Amsterdam, Amsterdam UMC, the University of Amsterdam and the University of Twente.

It’s clear from the stories that Tijdink hears from junior researchers that his courses fill a gap. “There’s a lack of soft skills in scientific research”, he says, “and that’s putting it lightly.”

The courses Tijdink develops are primarily aimed at junior researchers, although many problems actually are exhibited by professors and group leaders. Tijdink: “Academic leaders are the cultural carriers of a department. Some of them are particularly self-satisfied and show little capacity for self-reflection. They probably won’t be taking a course because they aren’t aware of any reason to change their behaviour.”

So then nothing ever changes. Tijdink: “It may be slow, but you can change things. For example, by including in the hiring policy for lead positions requirements about a person’s leadership and interpersonal skills, and not just whether he or she is a good researcher with impressive publications.”

And something that really helps academic researchers is self-reflection, Tijdink believes. “It is extremely important to share negative experiences, otherwise you become cynical and emotionally drained. Junior researchers often don’t know who they can talk to about their experiences. That mutual recognition is an important element of our course.”