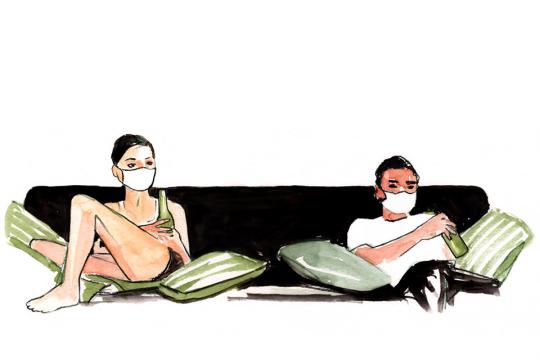 Online dating: which app is right for you?

comments 1
Times have certainly changed: the pandemic has put an end to meeting potential partners in bars, and any flirty smiles are now hidden behind a face mask. Singles looking for something to spice up their lives have little choice but to create a profile on a dating app. Exploring the digital world of dating.
BY Emma Sprangers, translation: Taalcentrum VU PICTURE Sjoukje Bierma

Dating apps have become more popular than ever before due to the lockdowns. So a couple of weeks ago, I decided to download the first five recommended by the App Store: Tinder, Happn, Hinge, Bumble and Inner Circle.

Someone with last name ‘Demic’ proposes to name our first-born child ‘Pan’. Someone else claims to be ‘as infectious as Covid’. But with the exception of some other puns, the topic of corona is mostly avoided like the plague as if by general agreement.

Some people seem to be feeling some hesitation about being on a dating app. Their bios include sentences such as: ‘I would have rather met you in a club’, ‘Let’s come up with a better story of where we met to tell the grandchildren’ or ‘Only here because I’m bored’.

The majority of profiles on trailblazer dating app Tinder (making online dating cool for a surprisingly young audience back in 2012) have chosen a clear genre of photos: mostly naked torsos or mirror selfies. It can be difficult to tell if someone has freckles or if you’re looking at a dirty bathroom mirror.

Most popular images are naked torsos and mirror selfies

The short bios included by users under their profile pics mainly contain information such as height or statements like ‘not looking for something serious’, ‘hypersensitive, open-minded, opinionated’, ‘not interested in a one-night stand’. One says he’s not looking for ‘women of questionable morals’. If that offends you, just swipe left [swiping left is how you reject a potential match, ed.].

Most opening sentences are lukewarm compliments. Someone sends a beer emoji and when I don’t reply in under 30 minutes, an incomprehensible stream of letters follows. Apparently you need to be quick. Others ask about my plans for the weekend, what I’m doing now, where I’m going this evening, if I’d like to come over.

The app focuses mainly on the visual aspect of dating: pictures. Or, as someone unapologetically shares in their bio: ‘casually judging you with my friends’. Tinder even encourages this behaviour, through the use of a button that allows you to share a profile ‘to find out what your friends think’. This focus on looks does little to stimulate in-depth conversations.

The app appears to be mainly geared to casual encounters, in no small part because Tinder constantly encourages you to continue swiping with push messages starting with ‘Hey, heartbreaker’. Tinder can work wonders for those looking to quickly warm the other side of the bed.

It is well-known that Tinder develops an algorithm based on your app usage. The app tracks how long you hover over someone’s picture, if you scroll down for more information and which profiles put you off. Based on this information you get a personalized selection of profiles. Happn’s approach is more rudimentary. It works like a fishing net of sorts: anywhere you go, the app collects data within a radius of a few hundred metres from other people also using the app. You can then like them or even send them a message, no match required.

Within a radius of 250 metres

This app is marketed to convince us that it will help us talk to that cute guy or girl we saw but were too scared to approach at the time. Every evening after ten o’clock, when everyone is back home, the number of users in my area skyrockets. There are approximately 173 users in a 250-metre radius – unsurprising in a building with 300 homes for young people and a Student Experience right around the corner.

The fishing net formula means the haul is large. Where other apps are often linked to Facebook and propose matches based on your likes, your friends, or your level of education for example, Happn makes it possible to meet people who may have totally different interests, but happened to pick up a prescription at the doctor at the same time you did. And so Apparently I cross paths with a photographer in an open relationship who is looking for a muse to take on a road trip, a Google consultant from Peru with a penchant for sushi who loves to play the piano, and a professional mover with a particularly colourful sock collection.

You can also see how often you crossed paths with someone. Apparently I took the ferry with some guy 48 times, and so I promise him we would definitely have a chat next time during our next crossing. It does make me a little uncomfortable that people in my area can see I am looking for a date. During my walks around the neighbourhood, I find myself glancing around a lot to see if I recognize someone or if I spot someone recognizing me. It can also be a bit annoying to see that there’s a good chance you might run into the person you had a boring conversation with on another app in the elevator of your own building.

This app sets the bar high with its slogan ‘designed to be deleted’. While other apps are fine with users just posting a few jolly pictures, the designers of dating app Hinge aren’t as easily satisfied. You can only complete your profile once you have selected at least three questions to answer. You can choose from a wide range of examples, with opening lines such as: ‘The secret to getting to know me is...’ ‘A Shower Thought I recently had: [...]’ and ‘Weirdest gift I have given or received: [...]’.

Your curiosity costs you 22 euros a month

Just like on Happn, Hinge users can send you a message even if you have not indicated if you want to be a match or not. You can see who liked you in an overview. Your curiosity costs you 22 euros a month though, because the free version only shows the last person who liked you.

You also have to pay to select your preferences. The rather eyebrow-raising feature of indicating the ethnicity of your future date is free of charge, but if you wish to select a certain height, religious background or desire to have children, you will have to pay up.

Where Hinge provides almost too much information, creating conversations that just drone on, losing momentum and making meeting up in person seem less appealing, the app Bumble has been able to strike the perfect balance. Just like with most other apps, people have a short overview on their profiles with how much they drink, if they exercise or play sports, their height, their star sign... but what sets Bumble apart is that the woman has to start the conversation and that that is only possible once a match has been made.

The woman initiates the conversation once there’s a match

The founder of the app wanted to create an alternative to Tinder, an app she had helped create but was fired from after a failed relationship with her boss. She hopes Bumble will serve to limit the number of unwanted advances and online intimidation. What if there’s a match but the woman has not sent a message after 24 hours? Then the match will simply disappear. No hard feelings.

Many users have linked their Spotify account to their profiles, so most conversations start with talking about music (my fault), but from there easily branch off into other topics such as childhood heroes, favourite movies, politics, flavours of toothpaste and – if you must – the lockdown.

Out of all of these apps, Bumble is the only one that lets users specify how they approach the dating scene against the background of the coronavirus measures. Here you can indicate if you prefer only virtual meetups, or would like to video chat first and then meet in real life, to see if someone’s worth taking the risk for.

Not every Tom, Dick or Harry can sign up for this app, because, as the makers proudly boast, every potential user gets screened first. The idea is that someone you know who is already on the app invites you into the Inner Circle. The requirements for making it through the screening are not entirely clear though, but I had to upload a different picture three times before I was approved. They want you to upload a picture without a filter, sunglasses or other people. That meant I had to toss out half of my carefully-selected pics.

With the opening section ‘ambition inspires’, they begin by asking questions about where you work, your level of education, your field of study and whether or not you obtained your degree certificate. Once you are done your dating profile looks more like a resume. Two other built-in features inquire about the destination of your last holiday and where you would go for a drink. I have a sneaking suspicion that they don’t want you to put in: two weeks of drinking myself into oblivion on an island in the Med, or ten shots of Jager for ten euros in the sportsbar on Leidseplein.

I have no idea whose inner circle this is, it’s certainly not mine

This app also does not require a match in order to send a message. Because the app does not ask for your age and location when you create your profile – and at that time I was already up to my elbows in other dating apps – I returned to the Inner Circle a week later to find messages from a 40-year-old tax consultant from Brussels (wine enthusiast, blogger, sailor) and a 31-year-old ‘business owner’ active in politics and agriculture in Eindhoven (while being a self-proclaimed card game magician, adventurer and believer in the ‘work hard, play hard’ motto). Most people don’t get any further than variations on ‘Hey, what’s up?’.

This might be a good option for people who want to practice their networking skills or who are interested in original ways to find internships. Besides that, I have no idea whose inner circle this is, it’s certainly not mine.