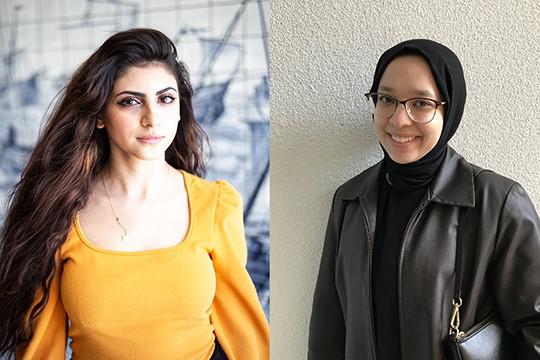 The Netherlands is abandoning the people of Afghanistan, according to two Afghan VU students. The Dutch government’s negligence has left them feeling bitter. “We’ve been betrayed, plain and simple.”
BY Peter Breedveld PICTURE Peter Valckx/Tahira Mohammad

Tahira Mohammad, a 21-year-old law student, is unable to hold back her tears. “It’s so nerve-wracking”, she says. “We just got a call from an uncle in Afghanistan who used to work for the US embassy in Kabul. He’s now been given approval to take his family to the US, but getting the necessary visas and the application procedure took a long time. We fully understand that the US has to process thousands of applications right now, but the stress and the feeling of powerlessness – it eats away at you.”

Other family members have fled to Pakistan, but not everyone has been able to escape yet. “And it really doesn’t even matter whether or not you’ve worked for a Western country. No one’s life is safe there.”

She apologizes for her tears. “I wrote down things I wanted to say in this interview, because I knew I would get emotional. But what can I say? That it’s all so unfortunate and deplorable? That would just trivialize everything.”

Left by the side of the road

The lack of compassion she’s witnessed has affected her deeply. “Especially in the Netherlands, because while other countries have been much more generous in taking in Afghan refugees, our government is even making things difficult for Afghans who worked for the Netherlands.”

It’s incomprehensible to her: “To say to these people, who you’ve relied on for years and years – people who have protected you – to just say, ‘Well, thank you very much and good luck trying to figure out how to stay alive.’ To just leave them by the side of the road, like rubbish. Of course they feel betrayed! The only conclusion I can draw is that the Netherlands apparently places little value on Afghan lives.”

Mohammad is also highly critical of the eagerness of Americans and Europeans to believe all the placating promises the Taliban have made during press conferences. “It’s as if everyone has forgotten what these terrorists have been doing for the last few years. And the Dutch government, which has constantly been one step behind, is just as much to blame for its negligence.”

“Future generations”, she says, “will look back at the footage we’re seeing right now and know that the international community didn’t do everything it could have done to protect millions of people. History will not be kind to us.”

She doesn’t want to waste too many words on the protesters in Harskamp who demonstrated against the arrival of Afghan refugees to their village by throwing fireworks and shouting racist slogans. “They’re not very intelligent people who were lucky enough to be born in the Netherlands, where their rights are more or less guaranteed, and from that privileged position they feel like they can judge people who weren’t so fortunate. Just shut up.”

Everything that has happened lately makes her feel cynical sometimes. “I noticed that I was starting to feel resentful, and that I was losing my faith in humanity. But when I heard about how generously the Dutch were donating to various fundraisers, that cloud started to lift a little. That was very nice to see.”

As for herself, she worries about her upcoming year at university. “It’s my last year as an undergrad, but I don’t see how I’ll be able to focus on my studies while my family is in danger in Afghanistan. I mean, what do I care about exams? I have more important things to worry about.”

Law student Parwana Rezai (21), who was recently interviewed by Ad Valvas about her work for women’s rights in her home country, cried herself to sleep every night, she says. “In the beginning, I didn’t quite realize what the direct consequences of the US withdrawal from Afghanistan would be. That the Taliban would retake the country that quickly, seizing Kabul in just a few days, no one expected that.”

‘20 years of work has been wiped out, it was all for nothing’

But she’s managed to pick herself up again. Together with other Afghan students, including Tahira Mohammad, and with the student association Fam Students – an offshoot of the VU Family – she’s now taking action: setting up fundraisers, collecting relief supplies and organizing a big demonstration on Dam Square. “It’s a way to forget about my grief and motivate myself.”

Because like Mohammad, Rezai is also constantly preoccupied by her family in Afghanistan. The area where they live, in the south of the country, was already under Taliban control, but now that the rest of the country has been seized as well there’s little – if any – hope for improvement. In fact, things might even get worse.

Rezai is angered by what she calls the media’s “gullibility”. It’s baffling to her that news outlets seem to believe that the Taliban have changed since the last time they were in power, when women were banned from public spaces and the Afghan people suffered under a violent reign of terror. Rezai’s grandfather and several uncles were killed by the Taliban.

“They’re terrorists, no better than ISIS, and the Western media is giving them a platform”, Rezai says. “This is how you normalize terrorists. It’s painful for us to see the organization that murdered our family being portrayed as a normal political movement. It feels like betrayal. It’s so unbelievably insulting.”

Afghanistan seemed to be slowly finding its footing, Rezai says. “It really looked like the country was making progress. But 20 years of work has just been wiped out. It was all for nothing.”

“The Dutch government’s attitude has been downright horrible”, she fumes. “State Secretary for Security Ankie Broekers-Knol, who wants to deny refugee Afghan children the right to be reunited with their parents.” The Netherlands is adding insult to injury, according to Rezai. “First this lax attitude, with a minister tweeting from a cinema while things in Afghanistan are falling apart, and then we just leave all those Afghans who worked for the Netherlands, risking their lives, to fend for themselves. It’s so incredibly disappointing.”

‘What Afghanistan needs now is planes, lots of planes’

But what can they do? Organize fundraisers and protests. “To put pressure on Dutch politicians”, Rezai says with determination. “To remind everyone that Afghanistan is one of the most unsafe countries in the world, and that it needs generous support.”

“What Afghanistan needs more than anything right now”, Mohammad says, “is planes. Lots of planes to get as many people out of there as possible.”