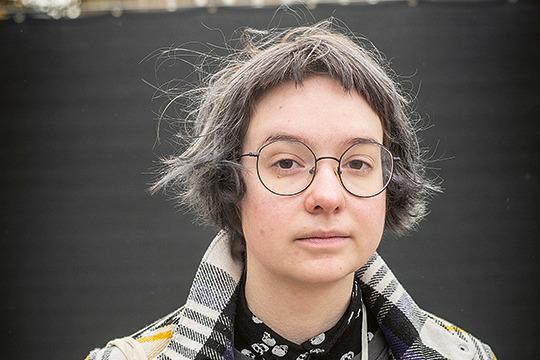 ‘My work is a mix of manga and western cartoons’

How did you get into drawing?
“I started taking it seriously around the age of thirteen. Mostly because I had a friend who was into it and one day he decided to teach me. It was a dream of mine to be able to draw properly because I was interested in telling stories. He showed me some of the basics and then I started putting in work myself.”

Did you pick up your style from him as well?
“Not really. There’s a popular artist on YouTube called LavenderTowne who was an early inspiration for me. I really liked her cartoonish designs, so my style developed from that. Then I got into anime and manga, with Jun Mochizuki being a big inspiration. I redrew a lot of her panels to practice, so that seeped into my style too. Now it’s a mix of manga and western cartoons. I also like to use a lot of colour in my work.”

The characters in your webcomics are very stylish and hip. Are they based on anyone?
“They’re fictional characters that I have been developing for a long time now, but I didn’t have a project to use them in until now. For their outfits I ask my more fashionable friends what clothes I should give them. All my characters have names and I can for instance ask a friend “give me an outfit that fits Selkie” and they’ll come up with something.”

What’s the last thing you’ve doodled?
“It’s probably a character from my favourite manga: Pandora Hearts. It’s on my mind a lot lately. Sometimes I doodle classmates and teachers too. When I’m in a lecture and I can’t focus, doodling the professor can help me a bit. Simply because I have to pay attention to them that way.”

Would you like to pursue a career in drawing?
“I like studying psychology and for now I’m focused on doing this three year bachelor’s programme. Once I finish my studies I’ll see what opportunities I have. I do have a lot of aspirations for larger artistic projects. Not only with drawing, but I also like to write.”

Drawing toolsLesly uses a Wacom One tablet, "which was the cheapest screen tablet I could find". And for software they use SAI.

You also take artistic and funny photos of Furby toys. What is it about Furbies that fascinates you?
“A lot of it has to do with nostalgia, because they were a big part of my childhood. There is actually an entire online community that’s into customizing Furbies. I haven’t met anyone that’s into Furbies in real-life yet. The hobby started when I saw a video of someone elongating a Furbie and I thought it was really cool, so I wanted to do it too. I like that it has an arts & crafts vibe to it. I’m not that great at it, but with Furby designs it doesn’t matter if the result is a little clumsy. I have nine finished Furbies right now and there’s a few more that I’m working on.”

Now that you’ve lived here for a few months, how do you feel about Amsterdam and the university?
“Poland is a very homogenous country so you only see people with one type of background. I like living here because I get to meet a lot of people from different countries. I also feel very lucky that I get to live in De Pijp with my partner. As for the university, I really like that it’s all on one campus. And I was surprised with how quickly I could build up a group of friends to hang out with regularly.”

Is your partner also a VU student?
“They’re studying at UvA. I might have some tiny sense of rivalry regarding VU versus UvA, but I don’t bring it up to their face.”