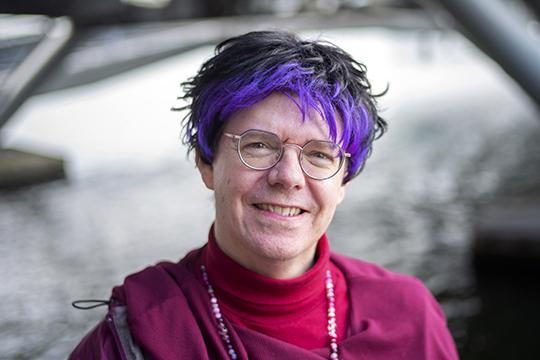 ‘I am an easy target for aggression’

comments 2
Bee Scherer is often addressed as male at the local bakery, but the professor Buddhism does insist on being addressed in a non-binary form at the university.
BY Welmoed Visser PICTURE Peter Valckx

In the newsletter of the VU there was a photo of the three university leaders all in neo liberal power poses, that surely did not give me a feeling of belonging, Bee Scherer (51) says. The professor of Buddhism has developed a keen eye on more subtle forms of exclusion trough their research and their personal experience as non-binary transgender.

“This photo didn’t communicate my values. For me a university stands for erudition, community service and respecting the complexity and diversity of the world.”

Scherer has been back in the Netherlands for 1,5 years now. They were appointed professor at VU Amsterdam in the midst of the corona time. They lives in Hoorn with their husband. “In Hoorn I feel more safe than in Amsterdam. Every metropolitan area has people looking for others who stand out to put their aggression on. And I am an easy target.”

It has been roughly ten years now that Scherer openly lives as trans/non-binary person. If someone has experienced how deeply binary thinking is engraved in our system, it is they. “Even the dean referred to me as ‘he’ at my inauguration. It was unintentional, he was very sorry afterwards, but it still made me sad.”

At shops people often call them “meneer”. “Often people read me as male. It might be because I do not dress overly feminine and I do not twist my voice.” At the bakery Scherer is usually not protesting, but in the university they are. “It is important for me to be recognized for who I am at work”, Scherer says.

‘A British colleague used to call me the Dutch faggot’

At VU Amsterdam they have mixed experiences. “The faculty has changed one of the toilets into gender neutral for me, and most colleagues make an effort to address me correctly. I appreciate that”, they say.

However, some colleagues were not happy with Scherer’s appointment. “I got emails from people who wanted to discuss my gender identity with me, which I politely refused”, remembers Scherer.

Scherer had similar experiences in the UK. “A colleague in academia used to call me the Dutch faggot”, they remember.

As a non-binary person Scherer knows by experience how changes in the political climate affect directly the way they are treated in daily life. When they moved to the UK in 2003 the country was more conservative regarding LGBTQ+-rights than the Netherlands, where Scherer lived before. “When we came to the UK our marriage was not valid and we lost a bunch of other rights. But the climate in the UK rapidly changed: within a few years civil partnership emerged, followed by equal marriage, they abolished a few discriminating laws, for example Section 28 which forbade teachers to mention homosexuality in schools”, Scherer tells.

It was around 2013 that Scherer came out as a non-binary/trans. “Although I had identified for years that way, by the outside world I was regarded as a gay male. When I came out I asked people to address me in a gender neutral way and I stopped going to male lavatories.”

For Britain backlash came around 2015. “Prior to the Brexit, there was an uprising of nationalism, of dividing the world into an ingroup and others”, Scherer says, “people were looking for strawpersons to put the blame on for things that did not go well in society, unemployment, mental distress, the rise in poverty.”

Scherer and their partner felt their breathing space decrease again. “We were talking Dutch in the train once, around 2016, when a group of boomers came in and told us to go back to our own country.”

Over the last few years the debate became outright toxic towards transgender women. “One of the main issues was about the use of female lavatories. Transgender women would supposedly assault cis gender women in toilets, which never really happened, but it legitimized a wave of aggression against trans people.”

The bathroom issue might seem not too important, but Scherer tells how deeply it affects people’s lives: “Many trans people develop urinary infections because they don’t dare to go to bathrooms. They either hold their pee, or simply don’t go to events.”
Also in the Netherlands the climate towards minorities has changed over the last 15 years, Scherer observes. “Minority groups are more being scapegoated. The Dutch word ‘allochtoon’ is horrible to me, it means some people will always be seen as others.”

Scherer hopes for a society where the variability of people is celebrated. “Even people who are now in the center of society will one day be old and become marginalized. A societal model that is more like a network with knots is better for everybody in the end.”

Door Leo op 17 June 2022
Can we find another word then ''subtle'' for these forms of exclusion? Because they are not subtle when you experience them on a daily basis. They are very obvious.
Door Jasmijn op 20 June 2022
Great article/interview on an important issue that's still very new to many Dutch people. I would however recommend using correct grammar, this makes using they/them as a pronoun look quite awkward, while it can be very natural.