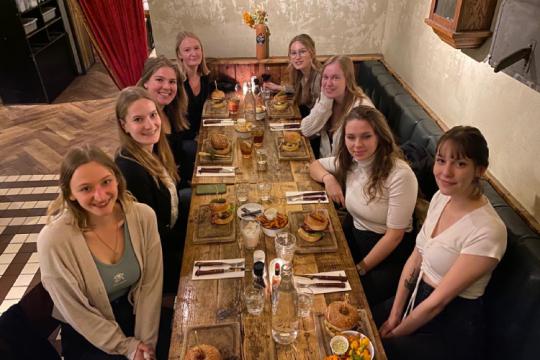 How German student Lisa made some Dutch friends

International student Lisa Früchtl went out with a couple of fellow Dutch students. ‘I had a great evening and maybe even made some new friends.’
BY Lisa Früchtl, student reporter

I am already in my second year but due to Covid, I sometimes feel as if I am in my first. Not because of the study itself but because of all the things that belong to studying, such as going out, hanging around on the campus, and above all - of course meeting new people.

Do not get me wrong, I am not a lonely wolf, who wanders along the aisles, desperate to get in touch with someone. But I think a lot of you understand what I mean, moving to a new city and then even a new country can be challenging from time to time. Also getting in touch with the locals seemed more difficult for me than I hoped. In my studies Communication Science there is a Dutch and an English track, and I sometimes had the impression the two tracks are more separate than intended. We still have many lectures together, but nevertheless I missed a certain group cohesion. I say this without pointing any fingers! It might be very natural to stick to what you know.

However, I still wanted to get to know more fellow Dutch students. I mean, I have been living in this country now for more than 1,5 years and still I hardly know any Dutch people. But how should I do that, I was asking myself. As it turns out, the answer is very simple: Just ask!

I have been living in this country now for more than 1,5 years and still I hardly know any Dutch people

As I barely have Dutch friends, I was wondering whom to approach and also how to. I remembered a fellow Dutch student, Maxime. We used to work together in a group project and she had been really friendly to me. So, I sent her a message, explaining I would like to write an article about how it is to spend time with Dutch students as an international and I asked her whether she and a couple of her friends would be up for taking me with them some day.

Maxime reacted very openly and invited me to join her and her friends after the last exam for some drinks. When the exam was done, Maxime introduced me and another international student, Franziska, to her friends and we decided to go to Uilenstede to grab a drink there together. It wasn’t planned that Franziska would come along, but the 6 girls approached us so openly and invited her to join. We all shared a bit of a silly mood, since the location (Emergo hall) of the exam appeared so random to us and we were just relieved to be done with assessments for a while.

Dirt on the floor

After we arrived in Uilenstede, we went to Lara’s place, where she lives together with 13 other students. The floor fitted the image of a proper student house: Posters on doors, artistically painted walls, and some dirt on the floor. We sat in the common area, drank wine, and chatted about boys, the gym, good places to hang out in Amsterdam - all these normal topics. Franziska and I also got invited to a house party Lara will have with her roommates and we were told to join the coming events of EOS, the faculty association. They would also be very helpful in meeting new people. 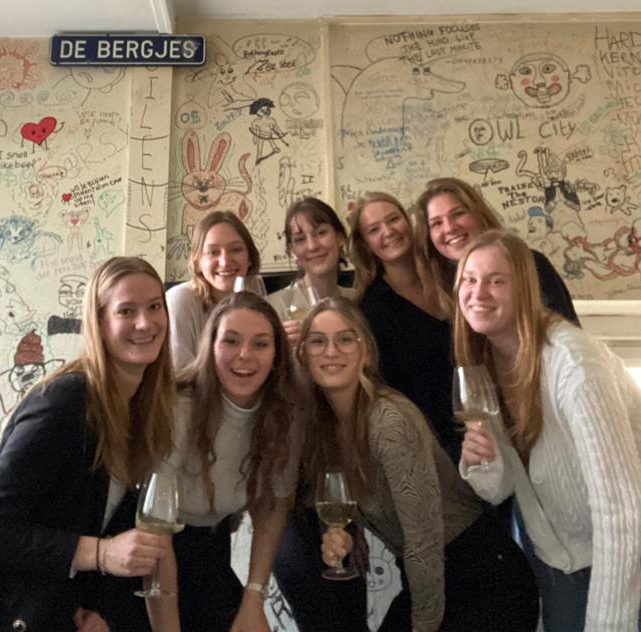 When I asked to take a picture for the article almost all girls looked at me confused. "What article?" They asked. Surprisingly, most of them did not know I was going to write about this experience, which for a moment unsettled me, since I do not want to be obtrusive, but it also made me happy. It showed that all of them are really open for new people.

After we finished our wines, we were starving, so we went to have dinner. The girls made a reservation at a restaurant called Cannibal Royale, and nervously asked whether Franziska or I are vegetarians. Luckily, we are not. But, besides their meaty name, the restaurant does sell vegetarian dishes. The place had a very rustic and charming ambience. Dark wooden tables, countless old grandfathers’ clocks, and fitting to the theme of cannibalism their menu presented a headless man, which somewhat reminded me of the movie The silence of the lambs.

We sat together, ate tasty burgers and a delicious dessert. We spent the evening laughing, having fun, and talking. We spoke about why we chose to go to Amsterdam for our studies, how we like it here and about the Dutch language. Also, about the Dutch directness, for which the Dutchies are known and which foreigners struggle with. We concluded though that once you get used to it, it is such a commendable characteristic. You just know what people want when they are direct and we internationals have to remind ourselves that there is a difference between directness and rudeness.

Another thing I found unusual was that we split the bill evenly, meaning that we divided the bill by 8. I am from Germany, where this is certainly not common. People tend to pay their own bills only.

And, how much Dutch was spoken? This is probably an issue Internationals worry about. "What if I go out with a group of Dutchies and they all speak Dutch?" It is a justified fear, since we all know that this just happens often when you hang out with people who have the same mother tongue. However, this was not the case at all. All six girls were really engaged and spoke English to us, even Lune, who said her English wasn’t the best.

All in all, we had great fun and decided to stay in contact. What I can conclude after this evening is that Dutchies are very friendly, open, and funny people. I had a great evening and maybe even made some new friends. So, to all of you, who want to get in touch with Dutch fellow students, remember: Just dare to ask!