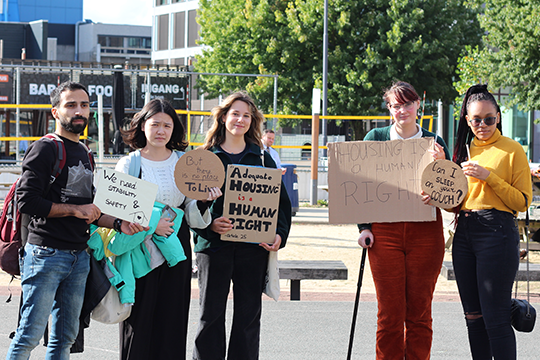 As the housing crisis in Amsterdam continues to unfold, the academic lives of potentially hundreds of students are in jeopardy as they spend their days worrying about where they will sleep. At least one international student has already quit and went back home because he couldn’t find a room.
BY Nour Khamis PICTURE Roos van Leerdam

In the wake of the large Amsterdam housing protest on September 12, many students who haven’t been able to find a room have come forward. The SRVU Student Union reacted by organizing a protest on campus, demanding that VU Amsterdam takes decisive action to stop this crisis in its tracks.

What is it like to not have a home? Ksenija Ustinoviča (21) from Latvia has been in the Netherlands for one month to study Media, Art, Design and Architecture. To have a place to sleep, she relies on the kindness – and couch – of a stranger. “I really thought it would last only two weeks, but it’s been almost one month now.”

Aside from the physical and practical discomfort of living in a living room, there’s also the mental discomfort: “It doesn’t feel right to stay there. I want my host to have his living room back.”
Despite being able to stay at this place for a fairly long time, Ustinoviča still suffers from a lot of uncertainty. “Sometimes they want to watch a movie or party, but I have to study. Some nights I’m not sure if I will be able to get enough sleep or not. Sometimes there are other couch surfers as well, meaning I share the room with them. There is no privacy at all.”

‘There was one shower and just one toilet for the sixteen of us. As you can imagine it was a nightmare’

Unlike Ustinoviča, Ryan Sylvester (20) from Zimbabwe already lived at Uilenstede for one year before becoming homeless. He started looking for a place at the end of June and by the time his contract ended at the end of August, the literature and society student still had not found a place to live. He thinks it’s unfair that international students can only have one year contracts, unlike their Dutch counterparts.

Sylvester had friends on whose couch he could sleep, but he also stayed at various hostels in order not to burden them. The first hostel he stayed was relatively nice, but too expensive to stay for more than a few days. He also tried a more affordable hostel: “This one was cheap, but it seemed like it was not cleaned at all and there were sixteen people in the room, without lockers or cupboards. There was one shower and just one toilet for the sixteen of us. As you can imagine it was a nightmare.”

Because his items were not safe at that hostel, he had to carry around his valuables wherever he went. “I carried three bags with me, which is frustrating and embarrassing.” During his week in that nightmarish hostel, Sylvester saw no light at the end of the tunnel. “It didn’t seem worth it to study here when I had to live like that. Especially with how much everything costs. The costs go up when you can’t cook for yourself.  Eventually I decided that I wanted to go back home. I don’t want to keep doing this anymore”, he told Ad Valvas.

But Sylvester invested a year into his studies, made friends and built a life in Amsterdam. He has no clue what he will do back home in Zimbabwe. “There are not many opportunities at all. That’s sort of why I left in the first place”. When he was still trying to find a place, he couldn’t get much studying done either: “It was almost impossible to keep up with anything. You’re not sleeping properly, because you’re not in a comfortable place.”

Ksenija Ustinoviča is going through similar difficulties. “I already talked to teachers, because I simply cannot focus on the literature. I can’t think about a 17th century picture when at the same time I’m not sure if I will sleep tonight. I’ve told teachers that I can’t read materials or complete assignments. However, I don’t think it’s the responsibility of teachers to listen to us whine about these things.”

Navigating life without a home turns out to be not only expensive and stressful, but also very time consuming. Ustinoviča is constantly checking for new apartments and responding to advertisements. She estimates that she spends three hours per day on it and more in the weekends. “When you count it all together, it’s more than a part time job”, the student from Latvia says.

‘Hospiteren’ (visiting apartments to present yourself to potential flatmates) at Uilenstede hasn’t been of much use either. “I wrote a lot of emails to get a room at Uilenstede and went there four times. They asked how much I drink and how much I party, when I’m literally homeless.” Ustinoviča has lived in seven countries before the Netherlands and claims that she never faced so much exclusion in the housing market for internationals as she did here. “Sometimes they would ask me if I speak Dutch and if I said no, they would mutter their disappointment.”

The SRVU Student union thinks VU Amsterdam’s policies have contributed to the current issues, “If VU Amsterdam accepts an X amount of students, then there should be housing for that X amount of students”, the student union’s vice chair said in an interview with Ad Valvas. Aside from demanding immediate emergency accommodation and the building of new student housing, SRVU wants the internationals to be provided with better information, so that they are less likely to be caught off guard once they come here.

The international students Ad Valvas spoke with also lamented the information they received, both before coming to the university and afterwards when they had specific questions. “I sent a few emails through a contact form of the university’s website and they just send a link to a page about finding accommodation. It’s a PDF to show you the different housing websites, which everyone knows already. I asked if they could offer more, but they replied that they couldn’t”, says Ryan Sylvester.

Mylène Brown-Coleman (24), an Artificial Intelligence student and VU teaching assistant received similar advice and is disappointed that room.nl was suggested. “It is presumptuous to suggest that registering there is worth it. Unless you have lived in the country for 5 years already, it is impossible to qualify.”  She is currently housed, but worries about what will happen to her once student housing provider DUWO evicts her in January. “My TA salary is not enough for me to afford the single rooms that most private rentals offer for 700 euros or more. I have asked the university for assistance in finding accommodation, but they say that because I am a second-year now they cannot help me.”

James Bonello (29), a master student of A.I. from Malta, recently found accommodation after a four month search. “International students who are planning to study here do not know what they're in for”, he says. “I will never forget my experience as it was rather traumatic. I couldn't sleep thinking about the possibility of being homeless, I was miserable, and I questioned my worth in this country.” While Bonello finally has a place now, he worries about what will happen the next time he has to search for an apartment. “I hope the VU and the government takes our concerns into account”, says the student who wishes to build a life here.

So far there is no sign that VU Amsterdam will meet the SRVU Student Union’s demand for immediate emergency shelters for every homeless student, or building 5,000 extra rooms. The International Office of VU Amsterdam did tell Ad Valvas that they promised the SRVU to have a good look at their communication about housing and make adaptions where needed. Besides that, the IO points to an unfortunate nation-wide problem. “We should all keep notifying the municipality of Amsterdam and surrounding municipalities of the housing problem, especially in consideration of the upcoming municipal elections”, the International Office says. In the meantime, numerous students will likely continue to live under insecure circumstances, or even drop out.