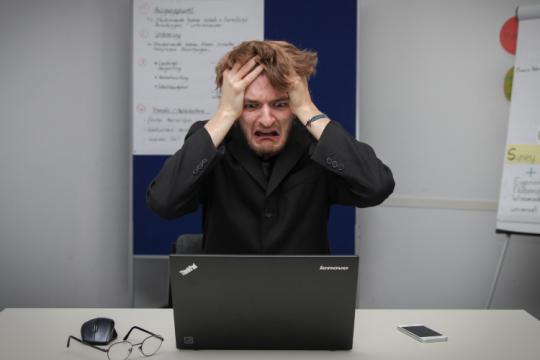 ‘Frankly, we did not foresee such a setback’

VU Amsterdam finds itself in deep water after a failed effort to replace several IT systems. An outright drama, some staff are calling it. But not Marcel Nollen. The Executive Board member is confident things will work out.
BY Peter Breedveld PICTURE Sebastian Herrmann via Unsplash

When it came out that VU Amsterdam had decided to replace its SAP IT system with a new ‘system landscape’ called MARS, the Works Council objected that the Executive Board ought to have consulted it first. Marcel Nollen, who had lately joined the Board, dismissed the Council’s protests with a response along the lines of: “Are you going to have an opinion about every little piece of new software?”

“It was and still is our view that, under the Works Councils Act, the Staff Council has the right to advise on major technological facilities”, emphasizes its chair, Henk Olijhoek. ”But the Board judged that section of the law did not apply in this instance. I suppose they thought we wanted to have a say in the system chosen, but part of what concerned us was the consequences for staff.”

‘Are you going to have an opinion about every little piece of new software?’

Two years later, many at VU Amsterdam are on the brink of despair. “It’s a drama – we were totally blind”, Majorie van Duursen, head of the Science Faculty’s Environment & Health Department, says. “Students are unable to register for lectures or exams because they haven’t got a VUnet ID, which they need to access the Canvas digital learning environment. New employees aren’t getting their wages, and many older employees’ records are incorrect. Suppliers can’t be paid, orders are going astray, and if they are delivered no one knows where they’re supposed to go. Or else orders are duplicated because of the impossibility of keeping track, which for example has left me with a batch of radioactive thyroid hormone with a limited shelf life that will end up in the bin. I have no access to anything, so no overview of our finances, HR or organization. It feels pretty hopeless.”

These issues had been simmering for months, but were brushed off initially as “teething problems” and “incidents”. (In late July, Nollen acknowledged in Ad Valvas that the problems ‘went deeper’.) “We feel we’re not being taken seriously”, Van Duursen says. “A crisis team have been assigned now, so at least the Board is admitting this is a crisis. But, so far, the team have only been talking with directors; they have no idea what’s happening in the trenches.”

‘The crisis team have only been talking with directors; they have no idea what’s happening in the trenches’

Not only is this situation preventing people from doing their jobs, it will also affect the well-being of VU staff, Van Duursen warns. And she thinks the current problems are only the “tip of the iceberg”. “A year and a half of coronavirus stress, and now this. Some people are considering handing in their notice. That’s also bad news for VU Amsterdam’s image.”

‘Some people are considering handing in their notice’

Judging from Marcel Nollen’s body language during a video-call interview with us, it does seem the Board has grasped the full gravity of the situation now. “Frankly, we did not foresee such a setback. These are not teething problems, there is more going on”, he confirms, adding that, “It’s incredibly frustrating.” For the moment, however, Nollen refuses to be drawn into blame gaming: “Right now, our goal is to resolve the problems.”

‘A year and a half of coronavirus stress, and now this’

Enter the crisis team – which, according to Nollen, is “making good progress”. The Board has also called in IT reinforcements to help unravel the problems. “In urgent cases, they’re applying quick fixes as a temporary stopgap and will look for structural solutions later.” Other issues have meanwhile been mostly ironed out, Nollen says, including the “identity access manager” problem that left new students and staff with no VUnet-ID. This step was key to getting other stalled processes back up and running. “Many new employees and some students had no VUnet-ID and so no access yet. Now, only three hundred are left, and they’ll be sorted out this week. For students, it seems to have been solved.”

It’s a “twilight zone”: no one knows how long it will take

That the head of the Environment & Health Department has yet to notice any improvement in the identity access issue is due to a time lag between the moment a problem is fixed and when it actually kicks in for users, Nollen explains. It’s a “twilight zone”: no one knows how long it will take.

But blame gaming or not, the Board was certainly forewarned. From the outset, red flags were raised in various quarters. To begin with, about the plans to rapidly roll out not only MARS but alongside it the new Digital@VU learning environment. In a recent letter to the Executive Board, the Staff Council pointed out that it had ‘repeatedly expressed concerns about the fast pace’. According to experts, innovations of this magnitude at organizations like VU Amsterdam typically take on the order of two years – leading the Council to conclude, ‘it would appear VU Amsterdam skipped a few steps in this process’. And then, when things started going south before the summer holidays, the Board did not seem overly concerned. Employees unambiguously aired their displeasure on Twitter.

To us, Nolan maintains that “it wasn’t until after the summer recess that the full scope of the problems began to manifest. Things did not go as we had expected. Initially, a steering committee twice advised us to hold off before giving us the green light the third time around. It’s possible we and the steering committee made a bad call, that we were too focused on the technical side instead of on end users.” The Executive Board has learned its lesson, he notes. “At the moment, my days revolve almost entirely around solving these problems with MARS. I am trying to get a full picture by talking with all layers of the organization and incorporating their feedback.”

Wouldn’t it have made more sense to maintain the old SAP system as a backup in case things went wrong? Nollen thinks not. “That system was obsolete already and some components are no longer being updated.” He also reiterates that, as soon as everything is back up and running, an evaluation will look into what went wrong and how it should have been done.

Two months ago, Nollen told Ad Valvas that the problems would result in an additional one million in costs for VU Amsterdam – a sum he deemed manageable. Even now, he expects the overrun will be limited, observing that “We are talking about work processes, not material damage.” He also discounts the charge that suppliers are not being paid. “If we can’t do it electronically, we’ll just pay them manually.” Rumours that suppliers are refusing to deliver orders because of unpaid bills are also incorrect: “Suppliers are being informed and we are working to quickly process invoices”, Nollen says.

Van Duursen thinks Nollen has underestimated the damage. “What about non-material damage? All the hours people have put in, and will still have to put in. Add it all up and you’re already well over a million. And it goes beyond work processes. Some people aren’t getting their salaries. That sounds pretty personal to me.”

What about VU Amsterdam’s reputation? Nollen cites recent cyberattacks by criminal hackers on several higher education institutions and says, “Their reputations haven’t suffered, have they?” Still, if it carries on much longer, this IT debacle will certainly be reflected in the National Student Survey. “That’s why we are working 25/7, as I say, to solve the problems”, Nollen agrees.

During a joint Zoom meeting with the Staff Council and University Student Council the next day, however, Nollen is less adamant about reputational damage. “I wouldn’t want to lay any firm wagers”, he replies when Staff Council member Artem Belopolsky raises this issue.

‘People are worn out’

Staff Council members Sabine Go, who lectures in Economics, and Student Orientation organizer Eric-Jan Hartstra vent their disgust over the added burden the IT problems have created on their workload. “People are worn out”, Go sums up. She has had to scrap her whole timetable and reschedule exams multiple times already. “I spent three days trying to get an Italian supplier paid and was on the verge of advancing the money myself when the payment finally came through.” Hartstra, who has to pay a group of five hundred students to guide first-year students during Orientation, had to track down all their email addresses himself, one by one, to get their Bank Identifier Codes (BIC).

Nollen, once more appearing apologetic, says he understands the frustration. “If we can do anything to take some of the burden off people, we’ll certainly make allowances”, he says. “Reduce the workload!” is Go’s response. Some faculties have cut back researchers’ publication loads already, but this has not happened everywhere yet.

HRM Director Renée-Andrée Koornstra, who supports Nollen, entreats the Staff Council to ask its “constituency” to take it easy on the team, who, she says, are doing all they can to help their suffering colleagues. ‘They’re getting lots of angry people on the phone and it’s also frustrating for them not to be able to do their jobs properly.” The Staff Council has gone easy on the Board, setting out its concerns in a letter. Chair Henk Olijhoek says he mainly wants to know how VU Amsterdam plans to prevent something like this ever happening again. Council members also throw up some ideas. Economics lecturer Marius Rietdijk suggests giving all employees “several hundred euros” in financial compensation to make up for all the additional work and difficulties. Would students be compensated as well?, one person asks in the chat. Someone else has a different idea: “extra Christmas hampers!”