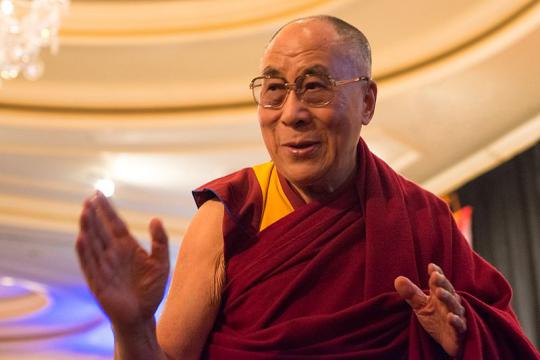 Would you like to meet the Dalai Lama? On behalf of the Faculty of Religion and Theology, Advalvas can make five VU students happy with a Saturday morning in the vicinity of the Tibetan spiritual leader, also an icon in popular culture.

On Saturday 15 September, the Dalai Lama will be in Amsterdam to open an exhibition about the life of Buddha in the Nieuwe Kerk. The exhibition features centuries-old Buddhist artworks, but there is also new art, including works from the Chinese artist Ai Weiwei and the American artist Yoko Ono.

The Faculty of Religion and Theology is involved in the exhibition. VU researchers hold a lecture and write an essay in the context of the life of the Buddha.

This is why VU students are given the opportunity to meet the Dalai Lama. "He said a while ago that he was no longer interested in heads of state and academics," says Miranda van Holland, the Faculty's valorisation officer. "He actually wants to meet young people."

Do you want to be at the opening by the Dalai Lama? Make sure you are free on Saturday 15 September, and tell us in 250 words what the Dalai Lama means to you.

The five best entries will be rewarded with the opportunity to be at the opening.

Send in no later than 1 August!

The deadline is 1 August. Only VU students are allowed to participate, so e-mail your motivation from your VU email address or mention your VUnetid. The winners will be announced on 2 or 3 August. Please e-mail submissions to this address, stating 'Dalai Lama'. Go for it!