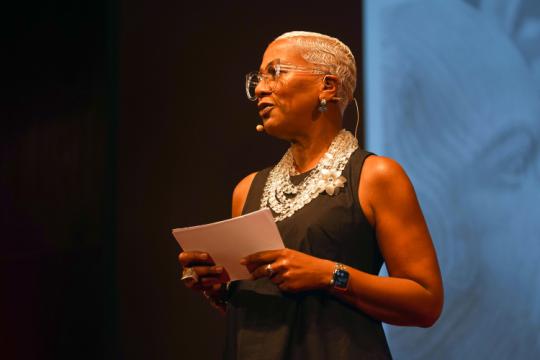 What are you as a white person prepared to give up in the struggle for equality? That’s a difficult question, if you want to be totally honest about it, according to Jennifer Tosch in her Martin Luther King Lecture.

“Black heritage did not start with slavery, but was interrupted by it”, Jennifer Tosch declared at the beginning of her Martin Luther King Lecture at Vrije Universiteit Amsterdam. “That heritage is much richer, and includes among other things the medieval Songhai Empire in West Africa and the legendary city of Timbuktu.”

Tosch, a Dutch American with Surinamese parents, is a heritage historian and founder of Black Heritage Tours in Amsterdam, Brussels and New York. Her company offers guided tours that reveal the hidden history of the African diaspora.

Last Thursday evening, Black Heritage Night was celebrated for the first time at VU Amsterdam, in order to ‘take time to commemorate a dark chapter of history’. Tosch, who gave the annual lecture in honour of the American civil rights leader and VU honorary doctorate Martin Luther King, Jr., said she had a problem with that phrase ‘a dark chapter’. It is just a variation on the much more common expression ‘a black page’, and Tosch pointed out how ‘black’ is still used to designate something as evil.

“Words matter”, Tosch declared. “In the spirit of Martin Luther King, we have to become more aware of how we use them.”

Her lecture, which wouldn’t have been out of place in a university lecture hall, put the spotlight on four women who have been marginalised despite playing important roles as equal rights advocates in the struggle against racism. Even King in his speeches focused on the masculine, on “brotherhood” and “man”, Tosch said. But his wife Coretta Scott King had been an activist years before him, and was so much more than just the wife of Martin Luther King, Jr. and mother of his children. She exercised her own “agency”, Tosch explained.

The three other women she put in the spotlight are less well known than Scott King, but are remarkable as forerunners in the struggle for the emancipation of black women and men.

The first is Francesca, a black resident of Amsterdam who is only referred to by her first name in a police report. On Easter Sunday 1632, she and a group of other women walked to the house of a sugar merchant armed with sticks and stones. A violent scene ensued; the daughter of the sugar merchant was wounded. It is unknown what the issue was, and likewise unknown what happened to Francesca.

The Surinamese Elisabeth Samson, born in 1715, was the first black millionaire in the American hemisphere. She’s remarkable because she fought a legal battle to assert her right to marry a white man. Tosch finds it regrettable that we only know her side of the story, but not that of the man who she wanted to marry. “That white guy, what did he think of it all?”

Sojourner Truth (1797-1883) was an abolitionist and human rights activist who moved to New York along with her white owners, a family from Dutch colonial Surinam, and was sold to a Brit who beat her because she only spoke Dutch and couldn’t understand him. Her most famous act is delivering a speech at a women’s rights convention known as the “Ain’t I a Woman” speech. It was later “translated” by a white abolitionist into southern dialect so that she would sound like a stereotypical southern black slave. Anthropologist Gloria Wekker was one of the Surinamese-Dutch women who re-translated the speech to give Sojourner Truth her own voice back.

Tosch finished her lecture by reflecting on the struggle for equality. “It’s about power”, she said. “And about what you are prepared to give up for equality if you are white. That’s a difficult question to answer, if you want to be totally honest about it”, according to Tosch.

The lecture was followed up with a kind of talk show with presenter Nicole Terborg, and in addition to Tosch, VU alumnus Mitchell Esajas of The Black Archives (TBA). Jessica de Abreu of TBA was also supposed to participate, but Esajas said she had to cancel because she is suffering from a burnout since the violent attack by a group of neo-Nazis on a group of anti-Zwarte Piet protesters which included Abreu. Other guests at the roundtable were former MP John Leerdam and Harcourt Klinefelter, former adviser to Martin Luther King.

VU Writer in Residence Babs Gons, along with Dorothy Blokland and Onias Landveld, satirised Dutch racism with a beautifully timed comedy sketch that raced through a whole bingo-card of microaggressions, prejudices and well-intentioned insults in quick time.

Gons was also a jury member for the Martin Luther King Spoken Word Contest, and announced the winner from the five nominees, who had presented their texts earlier in the evening in the unfortunately acoustically disastrous VU foyer. The winner was Tasha Mhishi, who had given a convincing performance full of rage and sadness.

Black Heritage Night concluded with a screening of the documentary ‘King: A filmed record...Montgomery to Memphis’, in the new Rialto Hall in the New University Building. But the film started before the programme in the aula had finished, causing half the audience to leave early.

That was a real shame.