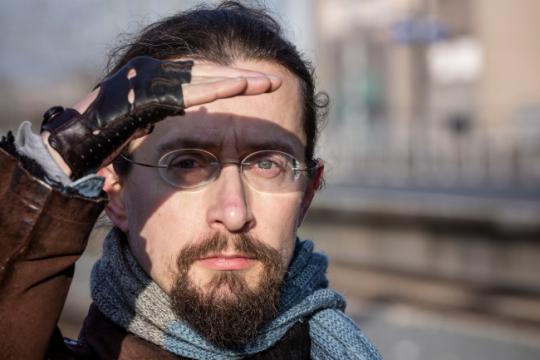 ‘Women were seen as too irrational to be philosophers’

Philosophy teacher Carlo Ierna has been awarded €50,000 to update the canon of the history of philosophy. “Non-Western and female philosophers have been actively erased from the canon.”

Philosophy teacher Carlo Ierna has been granted a Comenius Teaching Fellow by the National Coordinating Body for Educational Research (NRO), in order to modify the canon of the history of philosophy. “The traditional canon is not necessarily representative of the history of philosophy”, he explains. “As the years went by, a number of non-Western philosophers have purposefully been excluded based on the viewpoint that their ideas were more closely related to religion or spirituality than philosophy. As a result, Chinese, Indian and African philosophers have intentionally been written out of the canon. Many female philosophers have also been tossed out.”

The history of philosophy has not always been this Eurocentric and sexist. The old Greek philosophers, for example, were very much aware that they were not the founders of philosophy, and the influence of Indian, Arabic and Chinese thinkers was acknowledged all throughout the Middle Ages and beyond.

“Things went pear-shaped somewhere around the 19th century”, explains Ierna. “Under the influence of the Enlightenment, many movements within philosophy were perceived as irritational and even the idea of the ‘white man’s burden’ played a part – the point of view that it was the job of Western civilizations to civilize peoples in Asia, America and Africa.

But, according to Ierna, the worst part was the sexism with which women were written off. “Women were seen as irrational beings who did not possess the reason required to be philosophers. Even though a large number of female philosophers had published works in the two centuries prior.”

Clearly non-Western and female philosophers can be found. Like Émilie du Châtelet, for example, a highly-influential 18th-century philosopher from France, or the Dutch Anna Maria van Schurman, a 17th-century feminist avant la lettre. The Ghanaian Anton Wilhelm Amo was the first African in the 18th century with a chair at a European university. Among other things, he concerned himself with the rights of black people in Europe.

Ierna wants to bring thinkers like Amo back to the canon. “Not on ideological grounds or because we think the canon is too racist or sexist”, he explains. “It’s about going back in time and reviewing the reasoning behind these decisions, in order to better understand how the present relates to the past.”

For this purpose, Ierna uses the principle of reverse engineering. “Reverse engineering is when you do not have a manual for discovering how a device works; you then need to take the machine apart component by component to discover how it functions”, concludes Ierna. He aims to take the same approach to the canon of the history of philosophy. “Usually, the history of philosophy is treated from beginning to the present in chronological order. We are turning it around and going back in time, step by step.”

With his Comenius scholarship, Ierna can take a next step in the renewal of the canon. It is a continuation of an experiment for which he had already received a KnowVU Award last year. The funds can be used to hire a student assistant, and his students will be tasked with using old bibliographies to determine which philosophies have vanished from our collective memory.

“In a follow-up project, a partnership can be sought with other institutes or disciplines to give the project nation-wide attention. Disciplines such as Sinology, Japanology and Korean Studies could be reviewed but also classicists who look beyond the borders of Greece for the origins of the philosophical tradition.”