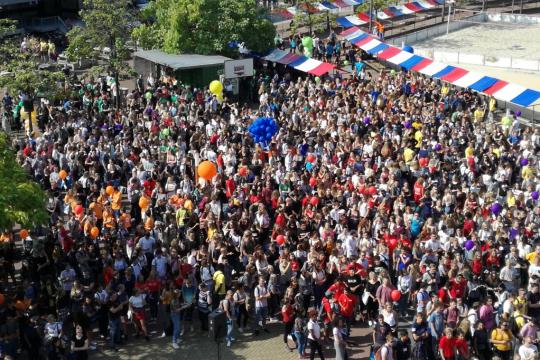 VU wants at least one introduction day on campus

While preparing for every eventuality, universities and universities of applied sciences are hoping that first-year students will have a normal introduction week, without all the fuss of social distancing and other restrictions.

It’s still a wide-open question: what will be possible when the new first-year students arrive in their university towns at the end of August? Will they be able to hold massive parties again, or will they still have to be careful about the number of people?

For the time being, a rather normal introduction week has been given the green light; the number of those infected with coronavirus is dropping fast and more and more people have been vaccinated. Therefore, universities and universities of applied sciences are busy making optimistic plans. “We’re hoping we’ll be able to dust off our dancing shoes this summer”, Avans University of Applied Sciences writes.

Universities are, at the very least, working with “various scenarios”, as Erasmus University Rotterdam has announced. That means they can easily change gears if the situation changes. Vrije Universiteit Amsterdam wants to give students “at least one day when they can meet each other safely”.

But a lot more would be nice. The programmes include treasure hunts, sports activities, comedy evenings, silent discos and obviously parties. Hourly schedules are being devised to limit peak crowding, just to be on the safe side.

Maastricht University will be asking for proof of a test, recovery or vaccination to get into the big parties. Such parties can then go ahead without further restrictions. This wouldn’t work if you had to rely on home testing.

In some cases they aren’t prepared to say very much. In Utrecht, for example, nothing has been announced yet about UIT, as their introduction week is called. “We are preparing for a physical, hybrid and online UIT” is the explanation on the website.

Certain aspects will very likely remain online. “Consider first and foremost the more practical aspects”, the University of Twente says. You won’t have to come to campus to register, for example. But for now there is also an online escape room on the programme in Twente.

Some students may not be able to attend in person. Just think of all those foreign students. They might still not be able to travel, or they might have to go into quarantine for a while when they arrive. VU Amsterdam is keeping an online programme in reserve for such students, “with online information sessions and interactive workshops”.

At the Hotel School in The Hague, nearly half of all first-year students come from abroad. “In some cases we offer them the possibility of doing their quarantine prior to the introduction week”, administrator Arend Hardoff says. “We did that in February too, in partnership with Van der Valk. During the introduction week, students will be meeting and making friends for life. It’s obviously very important that everyone takes part.”

And what about current first-years who missed the boat last year? Can they catch up on all the parties, tours and introductory talks that they missed during their own introduction week? Most schools are keeping the boat away from shore.

“We were still able to organise a reasonable amount for this group at the beginning of the academic year”, University of Twente says, for example. “We’re still going to be polling students to see whether we should organise something after all, and if so, what kind of event it should be.”

Erasmus University Rotterdam is referring this question to the faculties. “The University is in talks with the faculties about the possibility of organising activities where current first-years could get to know each other.” But participation in the big introduction week events isn’t on the cards.

Current first-years naturally have the option of participating as mentor, guide, crew, ‘mum and dad’ or whatever name volunteers are given in the various cities. This will give them a chance to soak up a little of the atmosphere.

Maastricht seems to be the exception. “We will be offering our second-year students, who unfortunately experienced INKOM mostly online, and upper-year students the possibility of taking part in the MECC parties and the opening, and other activities”, a spokesperson says. MECC is the congress centre where traditionally the big parties are held.

But VU Amsterdam also has plans. “We are currently looking at the possibility of whether we can organise an introduction day under the heading ‘Reclaim the Campus’, when we will hopefully be able to celebrate the re-opening of the VU campus and give undergraduates a chance to meet each other.”