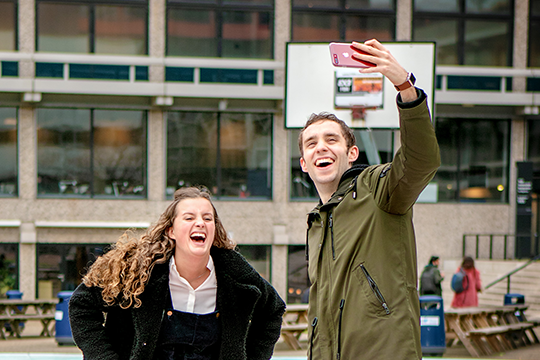 Taking selfies on campus is forbidden

'Feeling cute, might get stopped by security later?' According to university rules, people are not allowed to take pictures or record videos on the campus terrain. But what happens if we keep snapping pictures anyway?

According to Facilities (FCO), which is responsible for the rules about photography, the university is very strict about those rules. Capturing imagery without permission isn't just forbidden for professional film crews and shady individuals hiding in the bushes, but for everyone. Even if you're a student trying to take a selfie for your Instagram followers? "Especially then. If you're doing something on social media, you have to fill in the forms, because the press department needs to be aware of everything", says an FCO employee. He also explains that they don't differentiate between inside and outdoors on campus. And it doesn't matter who you are or where you will post the pictures. It's simply not allowed without permission.

03-06-2022
Paired up students photograph freedom in the city