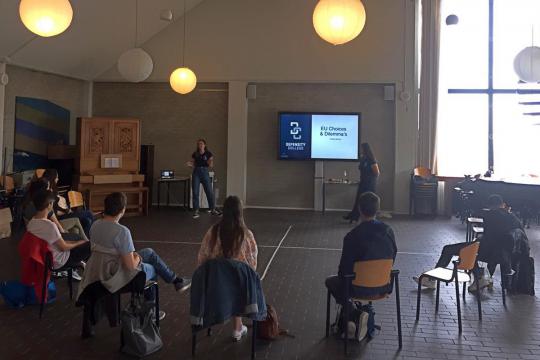 Students reclaim the campus during week of workshops

Finally they can be on campus and get a taste of it. About 150 bachelor’s students are roaming VU Amsterdam this week for the workshop program Reclaim the Campus. For some it marks their return, for others it’s one of their first visits. “I finally feel like a proper member of this university.”

It’s the fifth time on campus for first-year student Artificial Intelligence Sofia Perez (19). She’s having lunch with her group in the cafeteria. “It’s my first time in this canteen”, she says with a big smile on her face. “I’m happy to be here, it finally feels like I’m a student.”

This past year she mostly studied at home with her parents in The Hague. But now she gets the opportunity to walk around campus for four days and follow workshops as part of the program Reclaim the Campus. “We just had a workshop in personal storytelling. It was interesting to learn that if you want to tell a story, to friends, teachers, colleagues, it helps to be open, to engage with others, to target your audience. It’s good to know their preferences, to say things that are relatable, and to make a lot of eye contact.” She hopes to use those tips after summer to meet new people at the VU.

Zlata Dontsova (22) from Latvia is at the VU for the last time this week. “I just got the grade from my bachelor’s thesis: I’ve finished my bachelor”, the third-year Psychology student says. “Corona started in the middle of my studies. It was hard at the beginning. Everything was closed, my family was far away and the borders were closed as well. But I have my boyfriend here, and his family, and after a couple of months it was less difficult.”

She also quite enjoyed the fact that classes were online. “I’ve had no physical classes during corona, and of course I missed the communication with my fellow students and the personal contact with the lecturers. But my grades went up. At home I could be very focused on my study.”

One thing she really loved during these corona times: recorded lectures. “Please, write that down! Recorded lectures help to prepare for exams. You can pause the video, go back, relisten the lecture. I think blended learning can really work, when lecturers are available for q&a’s, and with real life tutorials.”

Standing up for yourself

“It’s crazy being on campus again”, says Xaripha Schaad (22), second-year Science, Business & Innovation and Medical Natural Sciences. “But it’s fun! I missed it: the atmosphere, people around you. That’s why I chose to join Reclaim the Campus.”

She just finished a workshop on cultural diversity. “We talked about each of our cultural problems. You notice you’re not the only one experiencing racist jokes or comments of an inappropriate sexual nature. I’ve learned to stand up for myself and that you can say ‘that’s not okay’ in a neutral manner.”

Aaron Roman (22) spent the entire lockdown studying at the VU. “So for me it’s not really a ‘reclaim’ of the campus”, says the second-year student Political Sciences. He entered the program because he had nothing to do at home. “At home I just watch Netflix, I’m better off killing time by walking around campus with other people.” And to have lunch, which he’s off to do now, in between two workshops.

If there’s one person for whom Reclaim the Campus was perfectly timed, it’s second-year student of Law Reshad Haydari (20). He’s had a rough time. “I’ve been at home for sixteen months and in that period I’ve only had six classes in person”, he says. He doesn’t live in student housing and has met few people. “It feels good to be amongst other students and to be reminded of what campus life looks like.”

Covid hit a half a year into the start of his study program. “I had forgotten what fun it is to be on campus. If you take classes from home, you’re on Zoom until your back aches. But it was mentally that I felt drained the most. You’re at home, don’t see anyone and online learning is just not all that. Before the lockdown I was in touch with three or four people. I’m still in contact with them, but didn't meet any new people.” That’s something he hopes will change next year.

Correction July 9, 2021: An earlier version of this article stated that one of the students was from Lithuania instead of Latvia.