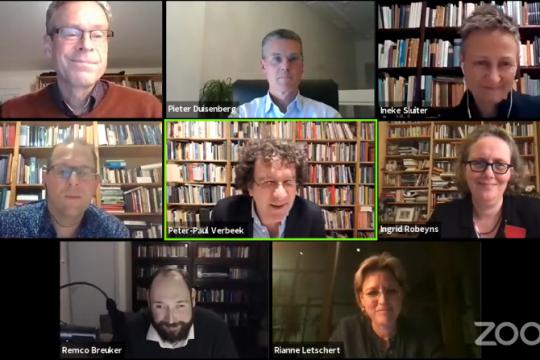 “What do our universities need?” asked activists and managers during an online debate organised by the KNAW science association. The ideas discussed ranged from calls for a strike to criticism of turning a blind eye to inappropriate behaviour.

A “tragedy” is happening at Dutch universities, said Professor Ingrid Robeyns of Utrecht University. They are structurally short of money, and yet they continue to provide top quality education. Few other countries have so many universities near the top of the international rankings.

“But that’s only possible because of the systematic exploitation of academic and support staff”, she continued in her opening address, a red square of felt pinned to her jacket and a well-stocked bookcase in the background.

Robeyns is one of the driving forces behind the WOinActie (‘Universities in Action’) protest movement, together with Professors Rens Bod (University of Amsterdam) and Remco Breuker (University of Leiden). Together they published a book entitled ‘40 Propositions on Science’ this summer, in which they argue for a new kind of university. It was the subject of this debate organised by the KNAW science association.

President Ineke Sluiter singled out one particular proposition concerning the relationship between education and research. Why is it so important for students to be taught by researchers? “There is such a thing as a hidden curriculum”, she said. Students get so much more from their lecturers than what is listed in the study guide, she continued, such as cultivating an inquisitive and critical attitude. And so funding for university education should always allow for “research time”, she argued.

The rector of Maastricht University, Rianne Letschert, chose to talk about a different subject. She spoke from the perspective of a university manager (“which some of you might find awkward”), specifically about social safety in the workplace. “As rector, it falls to me to pick up the pieces in cases that have escalated, sometimes over a period of decades, and cases where entire faculties have chosen to ignore what was going on.”

She doesn’t believe in “yet more protocols”, but she does believe in good leadership. “And that starts with yourself”, said Letschert. “We are quite happy to hold one another to account on our academic credentials, but not when it comes to our behaviour”. In her view, that should not solely be the responsibility of those “at the top” – professors, associate professors and lecturers all have their part to play.

The chair of the Association of Universities in the Netherlands (VSNU), Pieter Duisenberg, cautioned that the debate is a complex one. He pointed out the “trilemma” of accessibility, quality and efficiency. Changes to one will always impact on the others. But, he said, politicians do not always take this into account.

And that was not the only criticism directed at politicians in The Hague. “They don’t always make things easy for us”, said Ineke Sluiter, referring to the recent parliamentary debate on diversity in higher education and research.

Her words were echoed by the chair of the Dutch Research Council (NWO), Stan Gielen, who spoke of “knee-jerk criticisms” and micro-management. “It is quite remarkable that university diversity officers are the subject of parliamentary debates in The Hague”, he said. In Letschert’s view, too many new ideas are being thrown around in parliament. “We don’t have the politicians on our side”, she said.

And then we heard from the three pamphlet writers of WOinActie, who proposed their own drastic remedies: isn't it time we just locked all the doors in protest? “Why can’t you find the courage to tell them straight – we simply can’t do our job with the funding we’ve been allocated”, asked Professor Bod. “Find that courage.”

But for Rianne Letschert, that could only ever be “the very last resort.” “I once said to the minister: there will come a time when I’ll call for that. But I’m not there yet”, she said. “I first want to see whether the next government will be any more accommodating to our sector.”

Could the universities not tell the new coalition that they must have the resources that they need to be good employers and that if not, there will be no new academic year in 2022? “That will give the new government a whole year to put things right”, Robeyns suggested.

But Ineke Sluiter also expressed her reservations about a strike, especially in the middle of the coronavirus crisis. “We don’t need to beat around the bush: left or right, more funding is needed. But large swathes of the public sector are also underfunded and need more money just as badly as we do. Should healthcare workers and the police also be going on strike?”

If the universities closed their doors it would do “incalculable” damage to students, Sluiter continued. And this is the dilemma: “We feel genuinely responsible for our students”, she acknowledged. “And the worst thing is: that's precisely why teaching staff always end up working harder than is good for them.”

Professor Breuker understood the hesitation, but argued that in the long run, future generations of students will actually benefit from a more radical protest. “We can always find a reason not to do it”, he said. “But the coronavirus crisis will soon be behind us. Will that be the right time to close the universities?”

And students are also adults, he emphasised. They are perfectly capable of understanding that their education is only being made possible by their lecturers working overtime. Most of them would be sympathetic to a strike, he said.

30-01-2023
Psychological safety helps to enhance workplace performance
16-02-2021
WOinActie: university staff on the brink of collapse
11-09-2020
Growth Fund: is science about to get the money it’s been asking for?
25-08-2020
‘We need to take action on behalf of colleagues on temporary contracts in particular’
17-07-2020
Scientists hold a bike protest against temporary contracts this year