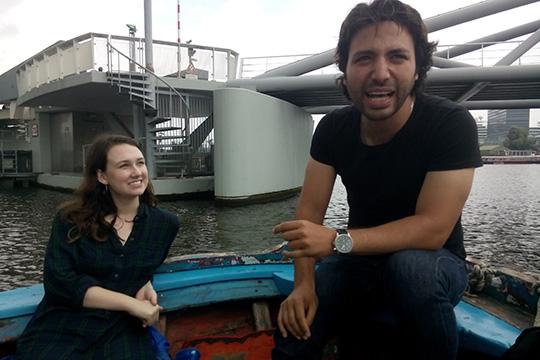 Captain Youssef has fled from Somalia, guide Tommy from Egypt. The duo is the hosts on the refugee boat tour through the canals of Amsterdam. The tour is part of the VU Amsterdam Summer School course on anthropology.

In the course, Hands-on anthropology and collaborative storytelling, students learn how to use stories of people in their research, to do justice to the narrators and their cultural background without losing sight of the scientific requirements.

We sail in a boat with the Arabic word 'hedir' (thunder, roar, powerful woman) painted on it, away from the quayside at the Mediamatic cultural center. The boat is part of the fleat of shipping company Lampedusa, and "we" are the captain and guide, seven students from Egypt, Ghana, the US and the Netherlands, Iranian lecturer Younes Saramifar, and your reporter. 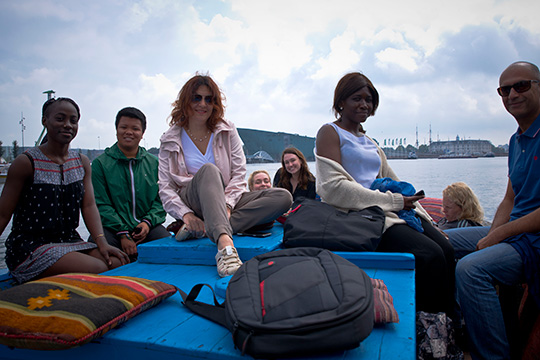 Soon after departure it starts to rain, and the boat has no cover. Did the refugees who crossed the Mediterranean in this boat also have rain? How many people there were, or what happened to them, is unknown. The boat was found on the beach of Sicily in 2014. Empty, apart from a pair of diving goggles. 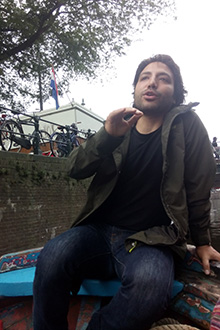 Tommy (writer, storyteller, theater maker, political activist) starts to talk when we pass the former Marine Site. There, the former Somalian-Dutch politician Ayaan Hirsi Ali was hiding, he said, after the murder on Theo van Gogh, who together made a film that was very critical of Islam. She was threatened and had to fear her life. When it was found out later that she had lied during her asylum application, she had to leave the Netherlands. She now lives in the United States.

The tour guides interweaves a very standard cruise through the canals of Amsterdam (it keeps happening fast with rains) with stories that you normally do not hear so quickly. And gradually it becomes more personal. About how Tommy himself moves from being a liberal to being and Islamist, supports the Muslim Brotherhood and the campaign for former president Morsi. How he knows that he will be arrested after Morsi's resignation in 2013 and what he does to defend himself against it.

Half an hour of beating

"I had two strategies to prepare for the abuse that would follow my arrest: eating and being beaten. In a short time, my weight increased from 78 to 94 kilograms, to have some reserves. And I asked a friend to hit me for half an hour every day. He found it difficult, but he did it."

Then he cheerfully says that many typically Amsterdam animals are immigrants. For instance the dove: it originates from Scotland. Or the rat: comes from Russia. Oh, and this is the Brouwersgracht, named after the beer brewers. The water in Amsterdam was so dirty that people got sick. That's why they made light beer; at least they could drink that.

Tommy is indeed arrested one day, but he is lucky. They want him to be a snitch among his friends and release him. Three months later, he escapes Egypt, directly to the Netherlands. There he is in detention at Schiphol for 12 days, and after ten months in a refugee center he receives a residence permit.

After an hour and a half, and many stories later, most of them told with a happy smile, we stand on the shore again. Youssef tries to wear a cookbook with refugee recipes, Tommy talks with the two Egyptians among the students, a somewhat older couple who responded with disbelief to his confession that he is an Islamist. 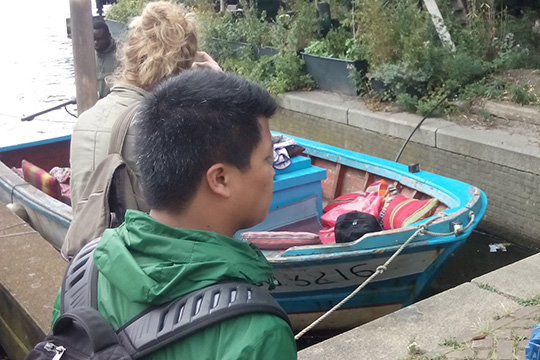 "The boat tour was to encounter what we call 'the other' through their stories and not through presumptions," says Younes Saramifar teacher. "I want to show that stories exist all around us. Students experienced how by sailing through Amsterdam by a boat and doing something touristy still they can find different stories and sufferings. All you have to do is choose to hear the stories and specifically by someone who is not native to Netherlands but has acquired perspective into the life in Amsterdam."

The next group of students is ready to board. Saramifar makes pictures, Youssef rearranges the cushions in the boat, Tommy asks if everyone is there. Ready for the next series of stories.

06-04-2022
‘It would help if we learn about anthropology in high school’
06-04-2022
VU Amsterdam and other universities ask for financial support to help refugees
11-03-2022
Anthrocine Filmclub is open to everyone
28-02-2022
‘Give refugee researchers greater security’
28-02-2022
Russian invasion of Ukraine also causes shock wave on campuses
07-06-2021
Anthropology withdraws controversial cartoons
20-07-2020
Foundation for Refugee Students UAF is pleased: more refugees obtain diplomas
25-07-2018
'Be an object in an antique store'