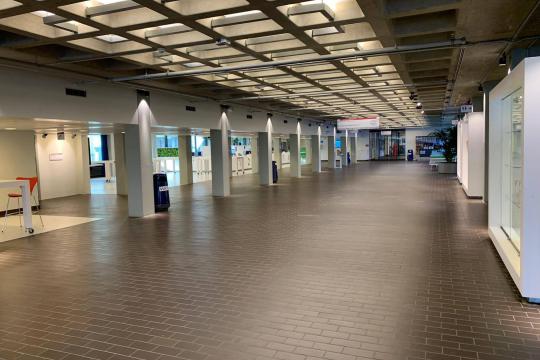 The Dutch government has announced a temporary strengthening of the partial lockdown currently in place. Additional restrictions on higher education are not among the new measures imposed, but Prime Minister Mark Rutte has made it clear that they have not been ruled out for regions where infection rates remain high.

Speaking at his Tuesday night press conference, the Prime Minister warned that while the latest developments are encouraging, the battle against the coronavirus is far from over. With this in mind, new measures are needed. They include the closure of all publicly accessible locations such as libraries, museums, theatres, cinemas and amusement parks for at least two weeks. And the maximum group size for people from different households has been reduced from four persons to two.

For now, there is no need for stricter measures in vocational and higher education. Educational activities are largely taking place online and in cases where students are required to attend classes, social distancing measures are in place. Meanwhile, in a letter to parliament, Health Minister Hugo de Jonge revealed that arrangements aimed at avoiding rush-hour transport peaks appear to be working effectively.

He also pointed out that tightening restrictions affecting students would be undesirable, as it would further delay their academic progress. This would not only be a financial blow to students and higher education as a whole, but would also lead to a shortage of graduates entering sectors such as healthcare, engineering and education. Student welfare and the quality of education would also be adversely affected, while the burden of work for teaching staff would further increase.

Even so, in “a small number” of regions where infection rates and hospital admissions are developing unfavourably, the government is considering additions to the national measures: these are likely to include a regional curfew, the closure of non-essential shops, and “closures in education from secondary school upwards”.

Further details should take shape in the coming week. At the press conference, the Prime Minister mentioned Rotterdam, Twente and Zuid-Holland Zuid (around Dordrecht) as regions where even stricter measures may be necessary. “We are keeping our finger on the pulse,” he said.

The Netherlands Association of Universities of Applied Sciences says consultations with the ministry are ongoing and that a lockdown is not currently on the cards. “We are pleased that our universities of applied sciences are open and operating at their current level.”

Pieter Duisenberg, president of the university association VSNU, hopes that a sharper drop in the Covid infection rate will render further restrictions unnecessary. “So far, thanks to the extensive measures already taken, universities have not been a source of major outbreaks,” he explains in a written response. “If the regional authorities do introduce extra measures next week, this will be a major setback for students, teaching staff and researchers alike. The impact will vary from one university to the next, not least because some forms of education and research rely more heavily on practicals and hands-on research. We will have to wait and see what happens in practice.”