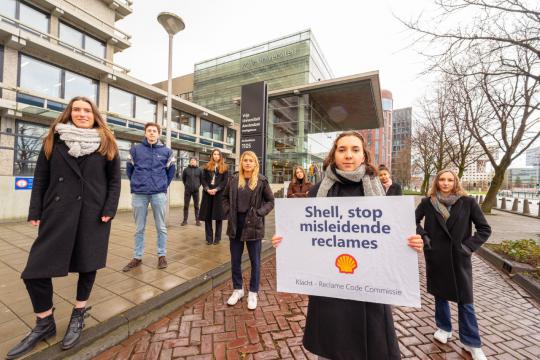 Nine Master’s students in Law wrote a complaint against a misleading advertisement campaign by Shell. It was submitted to the Advertising Code Committee by Greenpeace NL and Reclame Fossielvrij today.

The complaint deals with Shell’s advertisement campaign Rij CO2-neutraal (‘Drive CO2 neutral’). In this, Shell promises its customers to compensate for the CO2 emissions of their cars if they pay 1 cent per liter extra when refueling. According to the research done by the students and their lecturer Clemens Kaupa, this is misleading for customers.

“The complaint shows that the claim ‘rij CO2-neutraal’ promises something that cannot be fulfilled”, says Kaupa. “Shell pays so called avoided deforestation projects to compensate for the CO2 emissions of the cars. These projects claim to avoid existing forests to be cut down. So they do not remove additional CO2 from the carbon cycle, certainly not in a permanent matter. Consumers are misled into believing that the harm caused by CO2 emissions can be fixed.”

The students prepared the complaint in the new VU Climate & Sustainability Law Clinic, which is a type of course in which students work on real world cases, for real clients, just as a law firm does. In this case Greenpeace NL and Reclame Fossielvrij were the clients. In the past five months the law students dug into the world of CO2 compensation.

Kaupa: “The research led the students into this gigantic and dark universe of forest offsetting, carbon measurement and accounting – which is a really obscure world of its own – and complex topics in climate science and advertisement psychology. These subjects are very far away from law, and it was extremely overwhelming to all of us. But the students were up to the challenge, as the complaint shows.”

According to Kaupa the complaint shows how consumer law can be mobilized for climate action, which is also a great personal concern of his. “This is de crucial decade, say climate scientists, but no sufficient action is taken, and it is unclear what oneself can do.” Over a year ago he stepped into Central Station, and Shell’s campaign ‘The Great Travel Hack’ was all over the electronic screens.

“It was frustrating! That company invests less than five percent in renewable energy, they’re one of the top greenhouse gas emitters in the world. If it is still possible for a fossil fuel company to dominate the public sphere through its advertising, presenting the continued use of fossil fuels as the norm, then everything is lost.” He wanted to do more than just talk about it like he had for the past six years in his courses, and he developed the clinic project together with his colleague David Rossati.

'In legal education we should provide a space for their concerns'

“Many young people are deeply affected by the climate crisis”, he says. “In legal education we should provide a space for their concerns, and give them the opportunity to employ their skills for a goal they are committed to.” The students participated in the project voluntarily, no ECTS were awarded.

“Over the past five months the complaint grew into a monstrous document”, laughs Kaupa. “It’s almost one hundred pages long! I was told this might be the longest complaint the Advertising Code Committee has ever received.” An exciting couple of months are ahead for Kaupa and his students, waiting for the final decision.