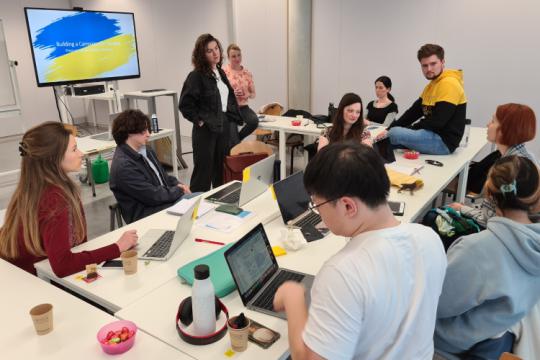 A group of teachers and students set up a fundraiser for Ukraine. ‘I would feel very bad if I couldn't do anything.’

“The anger I have inside is nearly killing me" says Ukrainian first-year Communication Sciences student Lev Medin (20). "No human being should feel this much anger. I've never wished anyone dead in my life, but now I do. You know who, we all know that this is caused by this one guy, this insane dictator."

Medin came to Holland in September to study at VU Amsterdam. He couldn't believe it when he received an early morning call from a friend in Ukraine telling him the war had started. "I blamed myself for not being there. I wanted to go back and fight, throw Molotov cocktails, anything. But after a few days I realized that I can do more for Ukraine here in the Netherlands. Over there, they only have one weapon for every six people, I would be useless. Here, I can help organize humanitarian aid."

The anger I have inside is nearly killing me

So Medin, along with other students and teachers of Communication Studies and Political Science, started a fundraiser at VU with hopes of other disciplines joining.

Last week, in a room on the sixth floor of the OZW building (next to the main building), about fifteen people brainstormed about what needs to be done and how to organize it. The initiative came from teacher Esther Schagen, but she fell ill. For this meeting she mobilized a number of teachers to help the students with the communication campaign for the project during a pressure-cooker session. "We want to help students like Medin do something for their country," said one of the teachers, Ivar Vermeulen.

Master's student Uliana Krainska (31) is also from Ukraine. She has been in the Netherlands since August, her husband found a job here. She came to the session with her one-and-a-half-year-old daughter Yeva Matyashovska. Yeva is busy with felt-tip pens and a large piece of paper, while Krainska takes notes on a whiteboard. "The news about the war starting, paralyzed me," she says. "I was so far away and couldn't do anything. After a few days, I set up a crowdfunding campaign with an organization of Ukrainians in the Netherlands to buy bulletproof vests."

The group at VU has compiled a list of six items that people in Ukraine need: thermal underwear, vitamin preparations, flashlights, socks, power banks and cat and dog food. There will be points of collection across campus, where people can donate goods or money. The headquarters will be the room of EOS, the Faculty Association of Social Sciences. They also need a website, a QR code, a good press release, and perhaps attention on the VU website. And sponsors need to be approached.

Experts walk in and out of the room, giving tips and advice. Journalism lecturer Anita van Hoof, for example, explains how to draft a press release. "At the top, put that what you think is newsworthy,” is one of her tips. There is also someone from the Communications & Marketing department. "Put emphasis on the personal in your communication," she advises. Ad Valvas is also asked for advice: "If you want to reach the VU community, you can't avoid Ad Valvas."

One student suggests a website where people can collectively donate money for a power bank. "But isn't a crowdfunding page that helps you raise a large amount to buy a lot of power banks at once better?" asks lecturer Marloes Jansen. Another lecturer points out the psychological effect of a site where you pay individually for a power bank: "This immediately shows the impact of your own contribution." These people know what they are talking about.

The fundraiser will start within a few days. Collected items will be taken to Ukraine with the help of the organization ‘Ukrainians in the Netherlands’.

Contributing in this way to the battle in Ukraine gives Krainska and Medin some peace of mind. "I would feel really bad if I couldn't do anything at all," Medin says. "This way I feel like I'm making myself useful," Krainska says. She lives in two worlds, she says. That of the war, which she follows closely through the media, and that of the peaceful Netherlands, where she sees people enjoying spring and relaxing.

"At first it made me angry, seeing people relaxing while others are dying in Ukraine. But now it makes me happy even," Krainska says. "It's hopeful that there are countries where people don't know what it's like to be bombed and lose everything at once. Maybe in a year's time, Ukraine will be at peace again as well."