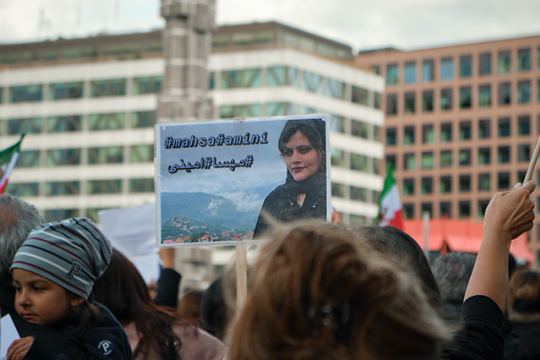 ‘Even outside of Iran we are not free’

As the protests and the crackdown against them intensify in Iran, several VU students try to do what they can to support the protest movement. But even within the Netherlands, they feel like the Iranian government is restricting what they can do and say.

There are at least several dozen Iranian students and employees within the VU community. The protests can have both a direct and indirect impact on many of their lives. To share their experiences and to discuss what they can do, a group of Iranians attached to the university got together last Friday. Four Iranian VU students gathered beforehand to speak with Ad Valvas about what they’re going through.

The students express a wide range of emotions when describing the events taking place, from sadness and anger because of the death that sparked the protests – and the deaths that followed – to relief that perhaps things will change now.

Threats over the phone

“When Mahsa Amini was killed, I experienced that I am Mahsa. We are Mahsa. Because she was an ordinary woman who was deprived of a happy life. For this reason I was angry and then became depressed”, says Ala. The young student says that this is the saddest moment she experienced during this phase of her life.

Amin, the only man within the group of four, makes a fist as he describes his anger. “It’s like you want to punch someone in the face”, he says. He would like to be in the streets of Iran protesting. Being here, he feels like things are out of his control. He hopes meeting with his fellow Iranian students can lead to something more productive.

The anger Amin feels can also be explained by the fact that his family was threatened. “My family is posting about it and sharing information. My mom was called by the Security Police telling her that she’s being watched and should stop doing what she’s doing”. It’s an occurrence that is experienced by many, he says. “The slogan is Woman, Life, Freedom, so let the women share their experience”, says Amin as he gives the floor to his peers.

Another student, Farda, says her classmates have been asking her what the slogan Woman, Life, Freedom means. This originally Kurdish slogan has been adopted by the protest movement. “Women are in the centre of the slogan, because the other two words rely on women. There is no life without the life of women, and no freedom without women’s freedom”, she explains.

Farda has experienced the restrictions on women’s freedom herself. For instance as a student, when she and her fellow students were instructed to wear a long scarf – a chador. “But all the girls decided not to wear it, so the regulation was changed to no longer require it.”

She says she has been arrested together with her partner by the morality police several times. “To make my partner angry, they told him: look at your wife, what kind of appearance is that?” After a moment of silence, Farda sighs and continues: “What a sad life we have.”

Student M.F. had her own run-in with the morality police. “They’ll ask you to get in a van and they take you to a station where they’ll tell you how to dress. They identify you in order to document your arrest and if you’re arrested multiple times, you’ll be in trouble.” She considers it a scary and demeaning experience.

Voice of the people

M.F would like to be more active in the protest movement. “I want to be the voice of people there. But my family is there. If I make a video and it goes viral, my family is endangered. Being here doesn’t give me freedom.”

“Because we already carry this weight with us and what’s happening now is adding to that, it affects our lives, our studies, our grades. Just because we’re not there doesn’t mean we’re having a good life”, she says.

'This is not just Iran’s problem, but a human rights issue'

While being grateful for the support the students have been given so far, M.F expects more of the university. “It would be best if we could have something in the hallway, as was the case for Ukrainian people, to let people know what is happening. That is what I expect from VU Amsterdam.” She hopes to relay the message that this is not just Iran’s problem, but a human rights issue. “Once people realize that, everyone should be demanding it”.

It is clear that for most within this group of students, the problem goes beyond individual incidents or a single law that needs to be changed. One of them refers to the president as a terrorist, and the government is described as illegitimate several times. But there is no unanimous feeling within the group whether this will be the turning point they’ve been waiting for. Ala: “I’m hopeful, but I don’t think change will happen that soon. I think the oppression will increase in my country first and that’s why I’m also very depressed and scared.”

The group is considering to hold a memorial for Mahsa Amini, but the time and location are as of yet undecided.

For security reasons, none of the students want to be mentioned with their (full) name. Their names are known to the editors.