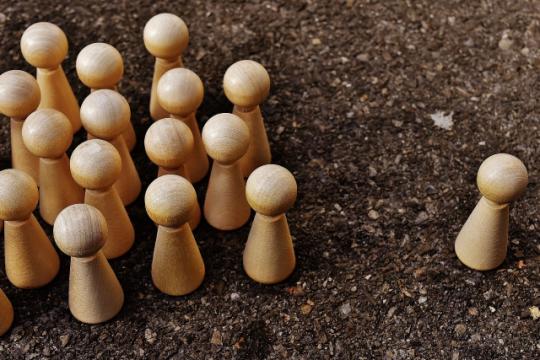 Debate on harassment: 'It's even worse for young scientists and women'

The Royal Netherlands Academy of Arts and Sciences KNAW held an online debate last night on the harassment of scientists and academics. “When pictures of your children are posted online, it comes very close to home.”

Even before the four speakers begin their presentations, KNAW president Ineke Sluiter thanks and compliments them for their courage. “Although it feels really bad that I even have to say that”, she adds. “It should not be necessary.”

Still, the topic of the evening – the harassment of academics, both online and offline – is a sensitive one. Frequently discussed examples include threatening stickers distributed by the radical right-wing platform Vizier Op Links (“Target the Left”) and the publication online of the home address of Jaap van Dissel, head of the National Institute for Public Health and the Environment (RIVM). This is not the first time the KNAW has addressed harassment: earlier this year it touched upon the subject in a report on academic freedom.

Sara Polak, American Studies lecturer at Leiden, admits that she was hesitant about accepting the invitation to speak in the debate. “This story is being recorded, it’s going to appear on YouTube and it could easily haunt me for years to come.”

Polak, who has published a collection of essays about trolling on social media, describes Twitter as “one huge school playground with loads of bullies and where no rules apply”. In the academic Twitter arena, she believes that university administrators in particular have a role to play, “to set standards and to enforce them where necessary”. The same applies to deans and professors. “You are the designated trailblazers in that”, she tells them.

She also provides some practical tips. For example, obvious as it may seem, think carefully about what you share on Twitter. “Ask yourself: would I print this tweet on a poster and hang it up in the university buildings?” And she warns administrators to be mindful that young academics without a permanent appointment are especially vulnerable. She therefore calls upon those in positions of responsibility to personally support staff who come under fire. “And by the way, that doesn’t mean just on Twitter.”

Marcel Gelauff, editor-in-chief of public-service news broadcaster NOS, is another of the invited speakers. He sees many similarities between academia and journalism, where people also have to deal with threats, harassment, intimidation “and in some cases even worse”. Personally, he has already lodged seven official complaints with police and has now quit Twitter.

Gelauff talks about the PersVeilig (“PressSafe”) project, launched in collaboration with the police, the Public Prosecution Service and other agencies, which offers journalists information, training and a hotline. It is also raising awareness of the issue in the political arena, he adds. “I think that’s an illustration of the project’s success, however sad its existence may be.’’

Something similar might also work in the academic world, believes Peter-Paul Verbeek, distinguished professor of Philosophy of Technology at Twente. He was recently appointed to chair the first KNAW committee on the freedom of scientific practice.

Verbeek is disappointed that academics who make frequent media appearances are often looked down on for it. “As if it’s the price you’re supposed to pay. That’s sometimes what you feel implicitly, all around you, and that’s really pernicious.”

Leo Lucassen, professor of Global Labour and Migration History, also has “an unbelievable amount of crap” thrown at him online every day, he says. That he is a “traitor to his country”, for example, and should be hanged.

What helps is that he has already blocked hundreds of people on Twitter. Generally speaking, he says, he can cope with the harassment. But that changed when Vizier Op Links posted photographs of his daughters online. “When it’s your children, it comes very close to home.”

Like Polak, Lucassen realises that some academics are more vulnerable than others. “I'm a bit older, my position is secure and I’m a man. That makes a difference.” It’s far worse for young scientists and women, he says.

His female colleagues sometimes let him read what they receive in their inboxes. “On top of everything else, there’s a whole layer of extreme misogyny and sexism. On that point, I think extra attention is definitely needed.”

KNAW president Sluiter, one of the founders of campaign group Athena’s Angels, agrees. At moments like that, she says, female academics are stripped of all their qualifications, knowledge and expertise. “The only thing left is a woman who’s said something in public.”

A viewer of the webinar wants to know how universities support intimidated academics. Is there contact with the police? Or are they planning to appoint security advisers?

A KNAW working group is drawing up an advice guide, Sluiter answers. For example, do people know how to block someone on social media? But also: when should you report a possible crime, and who should go with you to the police station? As an employer, NOS boss Gelauff says he has already filed official complaints on behalf of members of his staff on several occasions. “Then my name appears in the system, not theirs. People are often afraid of that.”

More ideas along the same lines are brought up. Polak stresses that universities need to have a good infrastructure for handling complaints. Lucassen believes that young academics should be trained by their graduate schools in how to deal with media.

And he also advises that, when invited onto a talk show, for example, people always check who they will be appearing with. For instance, he once declined a radio interview alongside populist politician Thierry Baudet. In cases like that, “It’s not about sharing knowledge. You have very little chance of really making your point, and you just give someone else a platform.”

Finally, Lucassen points out, never forget that this all comes from a small but very loud-mouthed minority. A much larger, but silent, majority actually appreciates science enormously. “So whilst we do have to worry about this, we also need to see it in proportion.”