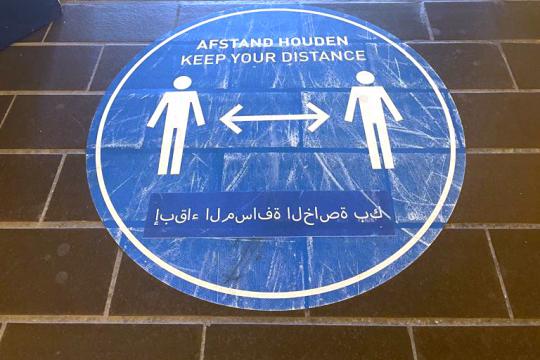 The stickers with the unreadable text
Campus 16 September 2021

Throughout the VU Amsterdam buildings, about a thousand stickers urge people in multiple languages to keep their distance. But according to native speakers, the ones in Arabic read gibberish. “This is a symptom of a structural problem.”

When asked what went wrong, the Facility Campus Organization (FCO) points the finger at a practical issue. “The text was accidentally mirrored in the process of printing”, says an employee. “The story’s no more sensational than this, but we do admit it’s clumsy” she says.

But according to the printing service at the VU, the text was printed just the way it was handed in. The mirroring happened before, during the translation. Petra Bos, Arabist and associate professor of Applied Linguistics, noticed the mishap and reached out to FCO to offer an alternative translation. “I was really happy when I saw the stickers, I think it’s a good initiative. Too bad the execution was done poorly.” According to Bos it’s a common problem that a program like Word flips the text so it’s to be read from left to right – while Arabic is written and read from right to left.

But that’s not the only problem. The letters are written down separately like you would in the alphabet, not how you write them in words. And on top of that, if readers even figure out they have to read in the wrong direction, the stickers tell them something like ‘Keep the distance with you’. “It shows that Google Translate – which was used for the first translation –  goes for a literal version. Having to ‘keep’ your distance is expressed differently in each language”, says Bos.

Anthropologist Younes Saramifar, who also posted about the stickers on his Instagram, doesn’t understand why there were no native speakers involved in the translation. “You could walk anywhere on campus and find an Arabic speaker”, he says.

'You could walk anywhere on campus and find an Arabic speaker'

But according to Too van Velzen who works at FCO, there was no time for that. They opted for Google Translate because they only had a few evening hours to hand in the stickers.“ The coronavirus measures are constantly changing, I don’t think people realize how much work that is to follow with thousands of signs throughout the campus.” When the advice to keep a meter and a half distance was dropped, they chose to cover those stickers with translations of a more general advice to keep distance in different languages. “I took the risk of it coming out clunky. Normally we would always go through the VU Taalcentrum - good luck finding a translator at 10 PM.”

The general signage on campus is in Dutch and English, and it will stay this way. Just this once, they decided to quickly cover up the 1,5-stickers with different languages. By adding an Arabic translation, their hope was to create more inclusive communication. “Unfortunately, the result was the opposite. Next time we will act differently.”

But this mistake does not stand alone, thinks Saramifar. “It’s a larger, symbolic failure. The VU prides themselves with being a diverse institution, but it’s not enough to have a diverse body of students. Clearly the staff is not that diverse or a mistake like this would have never happened.”

To Saramifar, this feels like “just another day at the office” at VU Amsterdam. “They seem to think that diversity makes money and looks good so it should be implemented. But they don’t actually seek inclusion if they don’t consult their diverse population.”

The structural problem goes further than VU Amsterdam, according to Saramifar. “They see things through a white lens, but there’s also a software bias that focuses on European languages. That’s why Arabic texts are automatically flipped to be read left to right. But the users are human, so if there was quality control done by an Arabic speaker, this could have been reversed.”

Most of the stickers have now been replaced with the second, rightful translation. Bos has asked FCO to reach out to her for future translations and according to an employee at the print service, they asked an Arabic-speaking colleague to double check the final translation.