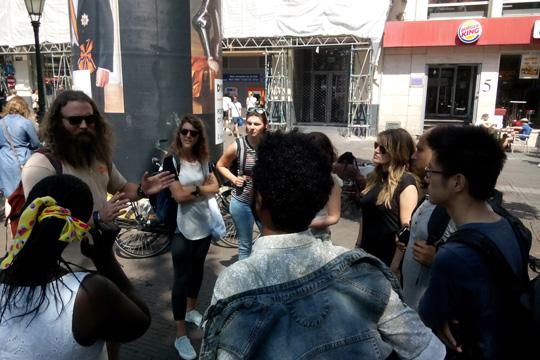 So you come to Amsterdam from India, Uganda or Brazil to learn why there is more crime in one place than the other. But after a few days you find yourself enthusiastically counting cigarette butts at the Leidseplein. What happened? "Amsterdam is really dirty!"

Eight students from around the world are enrolled in the course Spatial Crime Analysis at the Amsterdam Summer school at Vrije Universiteit. They learn how crime is related to the location where it is committed, and how it is best studied. This Thursday afternoon they take a test trip to the Leidseplein.

"Okay, everyone," says Professor Andrew Lemieux after lunch. "Grab your phone and open the Cybertracker model we have built during class." Cybertracker is a program where you can link everything you enter to the exact GPS coordinates of where you are.

Students use this afternoon to test the software model they built for their own research during this course, to see if it is complete and working properly. This weekend they will go out to gather the real data.

"My project is to find out if there is a relationship between the amount of litter on the street and how many dustbins there are," says Carl Cai from China. He is a Masterstudent in criminology in Utrecht and is living in the Netherlands. He will gather his data in Utrecht.

The Ethiopian student Biniam Abebaw investigates graffiti. "I want to know if there is less graffiti in places where there is more surveillance, such as near street lights, cameras or police stations." And Dabasish Buragohain from India investigates who smokes marijuana on the street, whether the smokers are Dutch or foreign, and whether it happens more often near coffeeshops and accommodations like hotels and hostels.

When all the Cybertracker apps and GPS receivers are activated, the students disappear into the streets around the Leidseplein. Real estate lawyer Juliana Ludmer from Brazil immediately starts counting cigarette butts. "In such a short course we can’t investigate thrilling murders, so I study litter with a few others. Perhaps we can help the police, municipality or government with our findings, to get people to throw their garbage in the bins."

She almost overlooks a mattress that stands against a wall. A few steps away lies a beer glass. And the cigarette butts are really everywhere you look. "I did not think I would find so much junk in such a small area! Amsterdam is quite dirty if you look well."

Ugandan Akello Ruth Apusan is an analyst at the Uganda Conservation Foundation. "In Uganda, we have been working with this system for quite a while and now I’m learning it too," she says. She stops and enters an umbrella lying on the street into her phone. "We use it to track down poachers. We train rangers to collect and analyze data so that most of the animals are captured. Then we can decide where we should send more patrols. "

According to Apusan all the data analyzes have already demonstrated their usefulness. "Today, 98 percent of poachers that are caught are actually convicted. Due to the exact data it has become much more difficult to escape a punishment."

After the test rounds, the group has a few ideas to improve the program, but overall it works fine. Buragohain forsees some problems for his project. "It is quite difficult to analyze the people smoking weed on the street. I have to try to hear if someone speaks Dutch or any other language to determine whether he is a local or not."

Ultimately, he wants to use what he learns for his work in a national park in northeast India. He hopes the data analyzes can tackle the poaching of tigers and rhinos. But poachers will be even harder to detect than marijuana smokers in the streets of Amsterdam. Since they can get so much money for a rhino horn in China and Mongolia, they will not be stopped so easily.

This is the English version of the report that was published on this website.