'I dressed up as a vampire'

"I think the three main thing that I do at the moment are studying, working and clubbing. The real student life, I guess. I just finished my midterms, so I have time to relax now. I think the midterms went well, but I’m not sure yet. It was easier than I expected, which was kind of weird. But I’m thinking that they might make it harder in the next courses, which makes me stressed. I just started a course called History of Anthropology, and I’m not really good at history, so I'm curious how that will turn out. I think this will be more theoretical.

During the week I have to work a lot. I work at a supermarket, where I stock the shelfs. I work with a lot of people my age, which is nice. Sometimes I see friends from university who go grocery shopping at the store. When they see me, they come by for a chat. The work is not bad, but it is tyring sometimes. And I don’t like that I cannot have my long acrylic nails because of my job. I do miss my nails sometimes, but other times I like that I can actually do stuff without the nails.

'I had fake fangs and fake blood, I went all the way'

Other than that, I’ve been clubbing a lot. I go out every weekend with some friends from Anthropology. Last weekend it was Halloween and we went to Panama; the club, not the country. They had Halloween Night there and we dressed up. Not everyone did an effort to dress up, but the people who did, went all out. I dressed up as a vampire, I had fake fangs and fake blood, I went all the way.

It was very busy in the club, there were so many people, I couldn’t even move. We were only 20 minutes late and we had to wait for an hour to get in. I think they sold more tickets than they had space for. It’s so weird, because clubs are supposed to have 25 percent less people because of COVID, but I think that didn’t happen. But I still had fun!" 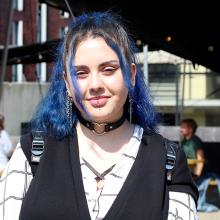