There’s a lot of debate on whether or not Dutch universities should offer English education. During the last period, I was part of a working group consisting of four Dutch speaking students and one native English speaker. Even though the four of us really tried to speak English all the time, any time the discussion became heated, when we were confused about a concept or when we just wanted to casually chat about our weekend, we spoke Dutch. We really tried not to, but it just happened. When I apologised to the native English speaker, she brushed it off, she said: “No worries, I’m used to it.”

These debates on English education also remind me of a course I was in, where the teacher was uncomfortable speaking English and thus, at the first lecture, looked at us - hopefully, asking: “Is there anyone who doesn't understand Dutch?”
We were silent for a few seconds before one girl raised her hand. “I’m so sorry”, she said, looking around for other allies, “but I don’t.” The professor sighed, said that it didn’t matter, but made very clear that it wasn’t his choice to teach in English - he had to and doing so would definitely affect the quality of his course.

'Are you too tired to speak English?' he asks

It reminds me of how, when we were looking for a new roommate in the student house I was living in for two and a half years, my roommate said: “Please put Dutch only at the beginning of your ad.”
“Why?” I asked.
“I don’t want to come home after a long day of working and studying and speak English all the time”, she said, “when I’m home, I want to relax.”

A student from Switzerland laughs when I ask him about his perspective on this issue.
He says: “Yeah - you’re all fine, and your English is fine, but you just have all your friends already from preschool, middle school, hockey, horse riding, soccer, or who knows what. How many foreign friends do you have?”
“A few”, I respond, “very little”, I admit.
He looks at me while rolling a tobacco. “Don’t worry”, he says, “I get it, I would probably have the same in Switzerland, but that’s why we internationals have to stick together in order to have a good time abroad. It’s not you who’s being shitty, it’s the university for promising us otherwise.”
“What do you mean?” I ask.
He shrugs, slowly licking the tobacco. “We have separate introduction weeks, separate housing, separate student associations, separate lives. I can’t even read the school’s magazine. I have no idea what it is you write about. They promise you to be a part of Dutch culture, but you’re just not. You won’t get in… So, it can feel as if they just use you for your money or for their cosmopolitan image. And do you know what I don’t get?” he lightens the tobacco.
“Hm?” I ask.
“There’s always this argument on keeping up with global developments in the internationalisation debate, but in reality, you Dutch are stressing out when you’re asked about last weekend’s soccer game. Seriously, you don’t think you’ll end up working for a high-end international business if you can’t even chat with a fellow student, right?”

He bursts out laughing, cuts off the line. 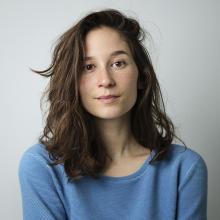