Is the Epidemic of Hipsters Killing Amsterdam?

While reading (a poorly translated version of) Nienke Stumpel’s blog, I stumbled upon the hilariously zeitgeist Hoodmap of my beloved new city. Effectively, the map serves as a testament to the frustration felt by most Amsterdammers (natives and visitors alike). The map is an open forum for which anyone can draw their own blocks of the colored categories (e.g., suits, rich people, hipsters, students, normies, and tourists) and report observed activity. Many of the tags on the map are pointed statements of protest, denoting areas such as the city center as mere locations for “running over tourists with your bike”, “stoned tourists [that] OD on brownies”, or simply as places where there are “no dutch people”. The West and the De Pijp/Vondelpark areas are an amalgam of yellow (hipster) and green (rich) blocks, with tags warning of “hipster tourists eating expensive food”, “rich people that don’t give to charity” and “expats that wish they were native”. Funnily enough, the latter tags indicate areas that I frequent the most — areas that boast the highest concentration of vegan cafes, vintage stores, and other elements of hipster culture that I shamelessly partake in since hailing from Portland, Oregon.

So, I decided to do an experiment. After growing up in Portland and moving away for college, I have seen the city morph into an unfamiliar stranger with an affinity for beards and overpriced coffee. Portland’s map touts the exact same mixture of yellow and green as Amsterdam’s with hilarious complaints of “brunch lines” and “gentrification” and “hipsters drunk on microbrews” that evoke the similar frustrations of Amsterdammers. Although Portland’s commercial success is largely due to the increasing popularity of the sketch-comedy show Portlandia that debuted in 2011, the comedy duo initially began as a means of providing social commentary on the city’s idiosyncrasies and foundational basis in ever-evolving socioeconomic neighborhoods. In fact, before the conception of Portlandia, Fred Armisen and Carrie Brownstein’s comedic analysis took the form of the humbly produced ThunderAnt, wherein Portland’s propensity cultural quirks was presented in a playful, non-sensationalized light. Yet, Portlandia quickly gained notoriety for its portrayal of Portland’s influx of young, urban middle/upper class adults via copious celebrity cameos and increasing viewer demand. Non-Portland natives are typically kept from the harsh reality behind the luxury condos that are converted from industrial warehouses and yoga studios filling every city block, and the displaced Portlanders (often minorities) are overshadowed by the incoming population of tourists and California expats. As the price of “artisanal toast” and “hand-crafted” juice continues to rise, the universal weapon of gentrification seems to have no end for the hipsters of Portland and Amsterdam. In my time studying here, am I perpetuating the problem? Or can I create a solution? 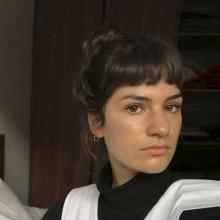 Loose Sandwiches, Dutch Men on Mopeds and other “Typically” Dutch Quirks
20 december 2018
A “Definitive” List of Men in the Club (by country)
05 december 2018
Yikes! The Dutch Aren’t Immune to Racism?
22 november 2018
Deflowering my Boyfriend’s Strip Club Virginity
06 november 2018
'So Many Ways to Prevent This'
23 oktober 2018
Amsterdam and LGBTQ+: Progressive or Pragmatic?
21 september 2018